Getting Lost in the Storyboard of my Mind

trees above the clouds

this was an experiment on split image... i taped a black mask on the bottom half of the lens of my holga (which is btw falling apart now), click, then double exposed with the tape on the upper half, click...advanced the film and repeated the process several times to get a panoramic look...click, click, click...
3 comments:

How Kodak BW400CN Got My Mojo Back

Although I’ve always been fond of B&W photos, I’ve avoided shooting with B&W film because there aren’t that many photo labs that can process the negatives in my area. The ones that do – they want my arm, leg and my birth right. So one day I decided I would develop my own B&W films. But first I needed a film. So I got this film from the local drugstore. Test shot some subjects. Bought the photo processing chemicals. And I was ready, right? Not quite… because I found out that I’ve shot with a Kodak Professional BW400CN film. Upon reading the instructions on the film box, I realized that it should be processed as a C-41 film. Whoops. Well, no problem... because C-41 films are the ones we bring to 1-day photo labs for processing our 35mm color negatives. How more fortunate can that be?
The BW400CN is rated at iso 400, which is ideal for indoor photography. It also provides the fine grain, highlight and shadow detail that traditional B&W films are known to deliver. Additionally, I find this to be forgiving when used for outdoor photo ops. I test shot this film with my Holga 120N at various settings and conditions, and I was able to get fairly consistent results.

The challenge I faced with this film was when I tried to match the color tones when scanning panoramic negatives in stages. For instance, the first half of the scanned image may turn greenish, and the second half may be reddish (see Photo 1). This is not a bad thing if that is what you are aiming for. But for seamless panoramas, scanning the negative in stages may not be the best approach. Not to be hindered, I used this peculiarity to my advantage. On one photo, I was pleased with the dissimilar tones on each quarter of a non-panoramic image when I scanned it in stages (see Photo 2). Cool, huh? 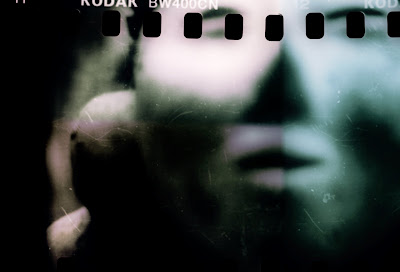 My conclusion? This film rules. It simplifies the way photographers shoot with B&W films, which can be developed in any professional lab or retail establishment running a C-41 process. Try it, and you’ll see how simple it is. Lomo on, baby!
Article appeared on Film Review of Lomography.com
1 comment: