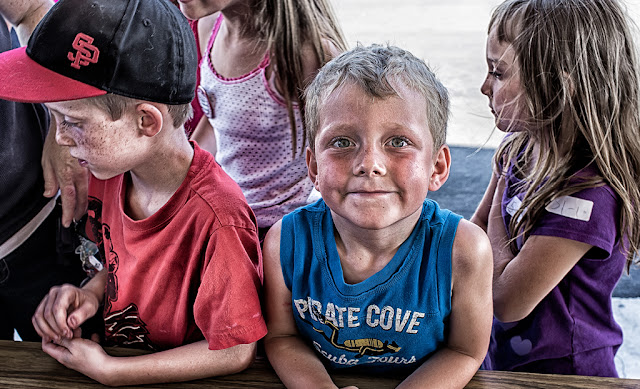 He is the most optimistic person in the world.  At least at that moment -- when all that are in his mind are ice cream, candies and cute puppies.

There is something about a boy dressed in blue.  Ever noticed a lot of paintings have been made depicting the Blue Boy?  This could well be my version.

Street photography is 90% candid but once in a while that 10% or less are unavoidable.  In my experience, when people on the street see I'm taking their picture their reaction is they just move away or ignore me.  This is not the case in other countries.  In the countryside of the Philippines, most people will actually stop and pose when they realize they are being shot.  That is fine but I usually want to capture candid shots.  I heard this is the same situation in some parts of India.  People will stare at the camera when they find out that their picture is being taken.

I've noticed this same reaction with children.  A young boy or girl sees me taking their picture, and the look at the camera is filled with fascination.  Perhaps, early on they have been conditioned to respond to the camera this way.  Parents would coax their children to always smile for the camera.  Later in life, children obviously grow and so goes away this kind of reaction.  The boy in blue is a case in point.  Notice his older siblings.  They are focused somewhere else.  After they saw my camera, they just turned away.  Not so with Boy Blue.  This is a less candid moment that I don't mind.  I hope he doesn't grow up.  I like him this way.

Dadaism No. 6 and Random Thoughts on Modern Art 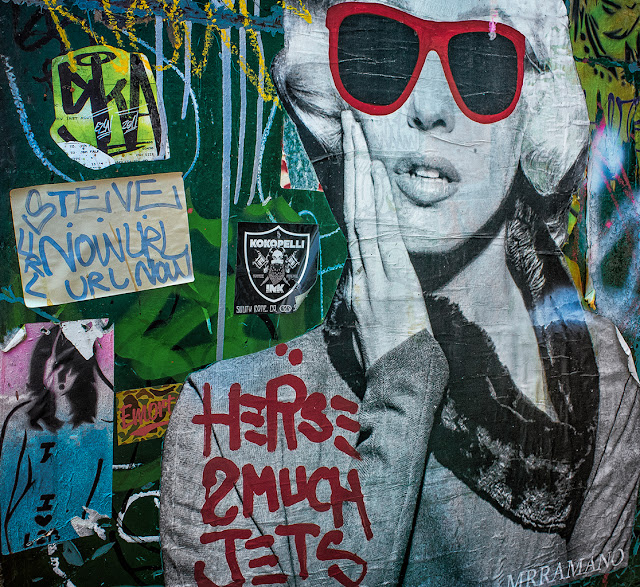 I found this while sauntering through the street of the LA Art District.  It may not look obvious but it's really a metal trash bin that have been decorated, perhaps with the permission of the owner, with graffiti and urban art.

Just how many times have we seen an enlivened portrait of Marilyn Monroe? On this one, it seems that the urban artist made sure that the Hollywood icon would be recognizable. Aside from the fake wayfarers and the red colored title, anyone looking at the picture knows who it is.  For others, it may even seem tasteless.  I may be the only one who ever noticed it.  Yet I'm fascinated by it.  In honesty, I'm quite intrigued as to how artists in the last few decades have been attempting to re-create from the past.  This approach in rendering a new Monroe is old...  yet it is somewhat new - or at least it's trying to be new.  This is the sad state of modern art in my opinion.

It reminded me of a post I made some time ago:

Van Gogh never sold any art in his lifetime.  No, I take that back... he did sell one but he bought it back.  Poor Theo, he could not sell any of his brother's work.  The irony is that people would not have understood or appreciated Van Gogh if his art had been kept in storage.  It would take many years before the public would begin to appreciate his work.  What sometimes bothers me is just because somebody said it's art, we are suppose to agree.  It's the cult of personality.  Okay, perhaps Van Gogh is not a good example. Andy Warhol?  Cristo?  Were they art geniuses or were they just good in marketing their art?

"There is nothing new under the sun." Ecclesiastes 1:9 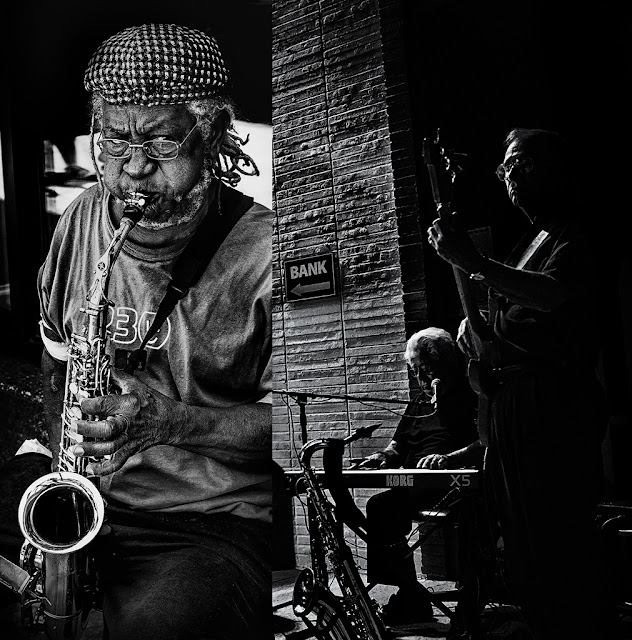 I love the idea of diptych. It's brilliant. Combining two unrelated photos to tell a coherent but different story -- different from the original context. Diptych has been around sin
ce antiquity and continues to be useful in modern art. Compare Andy Warhol's 1962 Marilyn Diptych. Triptych is more wonderful but very difficult to execute effectively. [That's pronounced "trip - tick". No it's not the one on the Steak House's menu.]

Taken on the street but at different places. Different times. Yet they could have been be playing together.

I've re-published my first Photo Book entitled "Angst and Uncertainty" with new additions. I'm pushing the book for $35. Sixteen (16) artworks printed on high quality archival paper. Hard bound. Please let me know if you or anyone else you know is interested. And please click the +Google button if you like what you see so that the post can be shared with others. Thanks.