Rose and I went to do the pictorial with the two-year old girl with her grandmother.  It was more difficult than I thought.  I set up a white background and LED lights.  Metered everything to get the right exposure.  Did some test shots on her prairie dog toy.  Place the toy on a small rocking chair.  More test shots.  More readjustments.  Bounced flashes on the white background.  When it was time to get her to sit on the rocking chair, she bluntly said, "No!"  She decided she didn't want anything to do with it.   Plan B - so I have to shoot where she wants to be.  Pretty much on an ugly couch.  Oh well.

They call me Deacon Blues

Downtown Denver: After the snow storm ... like nothing happened 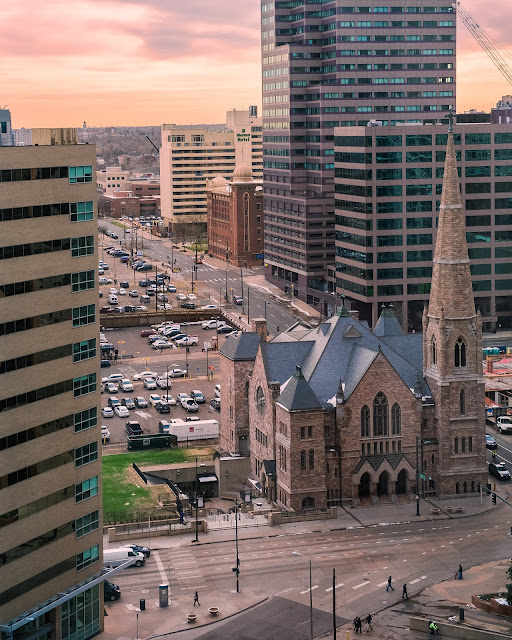 Trinity United Methodist Church along with other buildings on 18th avenue and Broadway, Denver, Colorado.  Properly named Denver’s First Methodist, the church was the first one built in this city.


Juzno:  What are you doing?

Rose:  I'm taking a picture of the snow here in Denver so I could share it to my Facebook buddies.

Juzno:  Yea but in a few hours the snow is gonna melt and people will think that it's summer in Denver.  The weather is crazy here.

The building is a neoclassical architecture that stands in complete contrast to its adjoining landscape where white homeless people have made it their "home".  I've noticed several people lying on the grass with their mats.  Next to them are recycled plastic bags stuffed with personal effects.  Who knows how many times those bags have been reused?    On the other side of the street, another group of vagrants hang out on the benches.  They shoot the breeze and recount their stories to one another while enjoying the Denver sunshine.  It was hard to tell how old they were as their faces were covered with dirt and loneliness.  Again mostly white people.  Crumbled clothes, winter parkas despite the warm temperature outside, and well worn construction boots that look vintage.  I wouldn't mind trading my R. M. Williams for a pair of those boots.  (Well, that is because my boots are fake R. M. Williams, which I thought were real since I got them in Sidney, Australia.  Another story.)  Yet, a group of young black men can be seen hanging out across the street.  Doing mostly nothing but - just hanging out.  They wear baseball caps with the visors turned to the side, designer sneakers, and baggy pants that ran very low.  I am almost sure they too have their own stories to tell.  It was a lazy day at the Capitol.