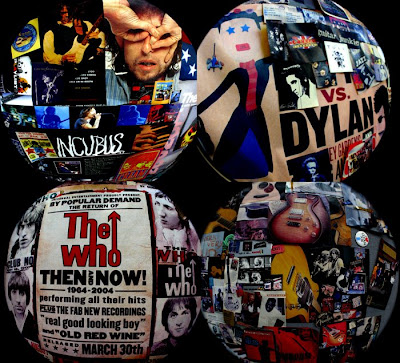 The images are from my cubicle's wall at the office.

Lately, I discovered I could use my LensBaby Wide Angle extension Lens on Rose's Canon a590is Point and Shoot. The lens converts everything to 0.6x. It works effectively on this camera if I don't use the zoom. I beleieve the corresponding focal length drops down to about 18mm -- very close to fisheye. Hence, this collage will show semi-fisheye quality. Pretty cool, I think. I'll be posting some more uisng this set-up soon. 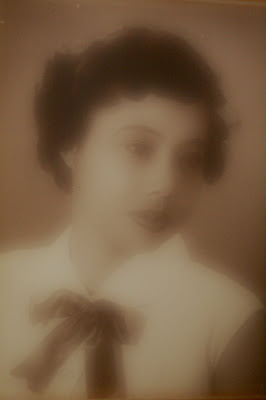 I recently posted some information on non-conventional approach to copying photographs and/or paintings. Sadly, the post did not receive many responses. I still think it’s a cool idea so I decided to post it here. No need to use a scanner and fix the image in a photo editor. The use of the zone plate (ZP) lens tends to eliminate all those unwanted blemishes on the original image. No need to worry about glares or lighting problems. The zone plate seems to work better with such aberrations. YMMV.

One commentator pointed out the ZP is definitely a tool for hiding the flaws, however, its effect gets applied across the entire image wiping off the desired details. For some images it does not work. For this particular image the details on her eyes are washed out. Hence there is a caveat. As in all cases, one would need a very good capture of the original image to begin with. Sometimes, that’s not the case with the older photos. Even with convention method, decent copying of photos that have degraded through time is very difficult as the result could be too much unwanted information. Oh, well :o

If you’ve read this far, you’re probably wondering okay this is wild but “what’s the point?” I realized as I’m typing away that not everybody who visits this site owns a ZP lens let alone knows how to take a photo. Well, you can send me your old photos, and I’ll copy them using the ZP. I promise I’ll send back the original but I can’t promise that you will like the copied version. My compensation is negotiable.
Email ThisBlogThis!Share to TwitterShare to FacebookShare to Pinterest
Labels: lensbaby, techniques 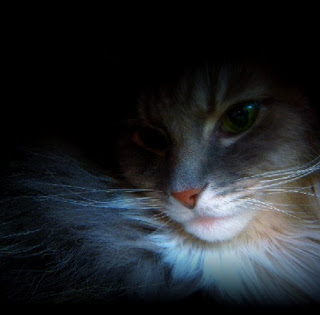 Our cat is the perfect model as he usually does not move a lot whenever I place my camera in front of him. This image was captured with the use of Rose's broken tripod and her Canon PowerShot a590is at f/8, 10 secs and iso 80.
What's interesting about this shot is that Rose's old tripod had been collecting dust for so long until I noticed that there was a screw at the bottom of the center column. I mounted a camera on it and I realized I could take shots as low as a couple of inches from the ground without having to bend or hug the ground. Sweet. Another tool not wasted.
In this image, Jerry was snucked inside his cubby hole, which was on the ground. Without the tripod, I would have to crawl and hold the camera for 10 secs at iso 80. The alternative would have been increasing the iso but I wanted a picture with minimal grain. After all I was shooting with a small sensor at medium resolution (8mb).
Email ThisBlogThis!Share to TwitterShare to FacebookShare to Pinterest
Labels: canon a590is, pets, techniques 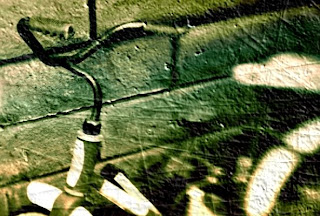 It’s actually strawberry shortcake to be exact. It has been outside at my yard for ages. There’s an old post on this blog in which I outlined the history behind the bike. Hence, I won’t bore you with any more trivialities. So, why another post? For one thing, it’s a different version of the bike photo. It’s been texturized and the gammarized using the Microsoft Photo Editor (MPE) that I have on my office PC. [Side note: I don’t know why they installed the MPE on my PC because photo manipulation is not what I get paid to do at work.] More on MPE’s capability later. A couple of people were gracious enough to notice this image, which I originally posted at the LensBaby forum. Since I didn’t get that much hits, I was so thrilled to find that there would be similar souls out there who would be interested in my art work. After all, we artists have a propensity to draw attention to ourselves. Laura, one of the commentators, inquired about the technique in manipulating the image. Here’s my response:

“hi laura, thank you so much for your interest. i shot the last one hand-held using my canon 350d and the original LB probably at f4 or f5.6. converted raw into sepia and saved as tiff, and then i imported the file on the original adobe photoshop elements (i refused to upgrade as i am so familiar with this oldest version and don't want to learn to use the newer ones, plus i'm a cheapskate). the post processing involves layering with gradient fill to get that color combination. then i exported the file in the microsoft photo editor and used the effect for texturizer. played around with the slider until i got the effect i wanted. the texture was a free jpeg download from the internet. i had to convert it to tiff as microsoft only accepts tiff. hope this helps. have a great day.”

Now that I remember it, I actually did not use gradient fill to get that greenish color. The photo insert proves it. In fact, I saved the file as “red bike 081129”. Well, duh? Why call it red bike when it looks green? Because it’s actually red.

Anyways, let me correct myself here: The MPE has a slider to control the gamma along with the brightness and contrast. I selected the gamma but instead of working in RGB, I played around with each color channel. I did this until I got the tone I wanted. Sweet.

The last step was texturizing it. The MPE has this cool effect where one can apply textures sans colors of the image used for texturzing. Most commercially available photo editors (ones that cost $$) work by importing an image of the textures. The image is layered unto the photo that requires texturing. If the image is colored, the imported textures will also contain the color information, which one may or may not want. The cool thing about the MPE is it imports only the textures while disregarding the color information associated with the image being imported. [Technically, the image is not imported. The data that makes up the textures are somehow extracted from the image, and used by MPE.] The final image appears as though it has been etched or crumpled. I’m sure there’s a way to achieve the same result in Photoshop Elements but I am not aware of it. Costlier softwares like Adobe Photoshop CS4 or Lightroom may be able to deliver the same result but I can’t afford it. My motto is to be resourceful. So I use what I already have or I improvise.

More on MPE: the last step prior to posting my imageThe MPE is a cool software that can do certain things more efficiently than Photoshop or Corel Paint. Just before I post an image on the web, I use the MPE as a final step to post-processing after I tweak everything in Photoshop Elements or whatever it is I’m using. My MPE did not cost me anything so I don’t know how much it cost as stand alone. In fact, I don’t know anyone who actually uses the MPE for effects except perhaps for re-sizing an image or converting bitmap to jpeg. There is also a size limitation, which I have yet to figure out. Sometimes it will accept a 300kb jpeg file; sometimes it won’t. I think most files that will be uploaded on the web will be less than 300kb, so for practical purposes the MPE can do the job for all photos intended to go on the web.Tags: texture, techniques, tools
Email ThisBlogThis!Share to TwitterShare to FacebookShare to Pinterest
Labels: canon rebel xt, lensbaby, techniques 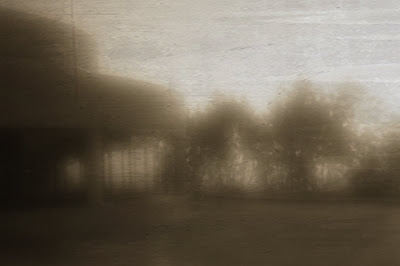 Texturized images are the trendy. I was a bit slow in jumping on this trend until now. After some experimentations, I excitingly discovered how textures could transform mundane images into dreadfully obscured ones. An example is the modern architecture of the building in this post being transported back in time. Or to some it might look like I forgot to wipe off that chocolate smudge on my camera lens. Yet I’m continually amazed at the results of applying this newfound approach. For this particular image, I used Photoshop Elements (or Corel Paint Pro?). The technique is so simple. I just opened the file the photo editor. Then I picked an image for use as texture. Open it in a different window. Copy and pasted it as a layer on the previous image. Clicked overlay, tweaked the percentage slider, and I’m done… for the most part.
Email ThisBlogThis!Share to TwitterShare to FacebookShare to Pinterest 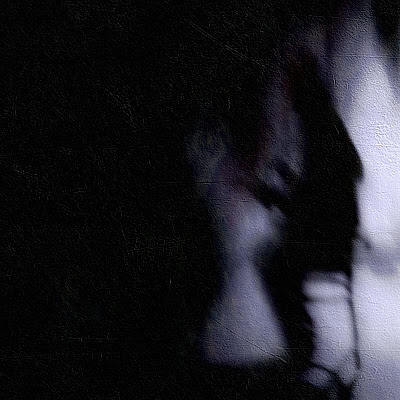 It’s been over two months since any activity appeared on this blog. Some of you who have been visiting this site may have concluded of its demise. It’s true that I’ve neglected this site as I’ve been busy with research and have been more active at the LensBaby forum (also part of research). I’ll try to change that and again devote more time here.

On the matter of research, I’ve seen cool blogs and websites out there. One that inspired me to get back to broader pursuit of art [as opposed to limiting myself to photography] is Nista’s Non-Photography. She blogs at Still Alive . Nista is articulate, funny and her blogs are useful for artists like me who are stuck in a rut. She has published a number of books although I have not read her books as they are so expensive. For instance, one paperback she recently published cost over $35 at Amazon.com.

Nista reminds me Jackson Pollack. Her worldview disregards and defies conventional wisdom. Her rule is no rules. As contradictory as this may sound, it is in fact a rule. It’s like one brother who once told me that he has no philosophy. I told him that he actually did, whether he admits it or not. I responded to him by telling him that his philosophy is to hold no “other” philosophy. Maybe this is too far out for some people, and besides I’m digressing to a point of sounding absurd.Check out Nista and enjoy her cool works. For starters, read this … or else!