The Doctor is coming to your house


The Doctor was last seen roaming in the streets York, England.  He is expected to come to your neighborhood tonight.  Please welcome him and treat him well.  Otherwise ...

Have a safe Halloween.

After the rain in SoCal 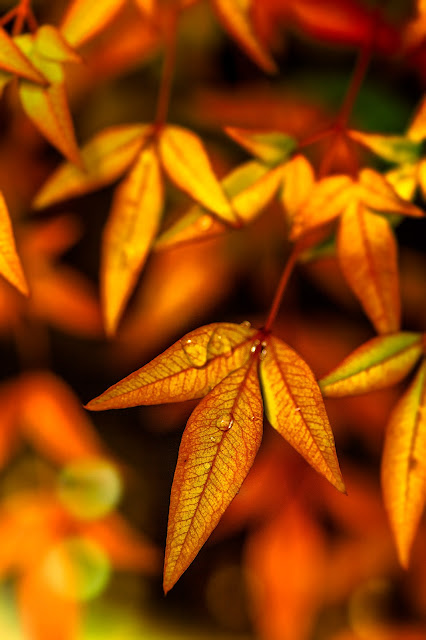 Hope your weekend is doing well.

It rained the other day.  It is getting to feel autumn here in SoCal.  Although officially autumn started weeks ago, it still felt like summer.

As I mentioned yesterday, I took out my Carl Zeiss 100mm Makro and started shooting macros again.  I thought it would interesting to see if my vision on macros have changed since I last shot with this lens.  I think that I am more into the bokeh and overall softness of the background in contrast to the main subject.  My older macros seem to be more tightly focused even on the background.  Nowadays, I'm loving the openness that a f/2 aperture can deliver.  This image is one of them.

Interesting too is I never took advantage of the wide aperture that the lens offers.  I was mostly shooting at f/8 in those days.  Yet one pays a premium on the wider aperture lens.  I knew what it can do.  But maybe I just did not have that vision.  Until now.

I completed photographing people at our church for our new phone directory so I can go back to shoot fun stuff.  Not that the church gig was not fun.  It was.  But I was under pressure to complete the project.  While with personal projects, I usually take my time.

I'm not even sure what this flower is.  Rose bought it last week to decorate the house as we were having guests over to celebrate her sister's 64th birthday.  I used my Carl Zeiss 100 mm Makro Lens on this one.  I haven't used that in a while so it was kind of refreshing to shoot macros again.

Santa Claus was confirmed to be a real woman living in Argentina.

The East Gate Clock in Chester, England was given as a gift to Queen Victoria.

Next to the Big Ben, the East Gate Clock  is the most photographed  clock in the world.

Shot with the iPhone 6.

Ben Nevis and On the Road Again


On the way to St Andrews, we stopped by for a selfie moment at Ben Nevis.  It is the highest mountain in the British Isle.  Its highest peak is 4400 feet.  Not a whole lot compared to our mountains here in Southern California.  (Mt Baldy's peak elevation is twice that of Ben Nevis.)

Thank you, Al Gore.  If not for your work, this would have been the only remaining mountain left in Great Britain.  As you have predicted, by 2016 the sea level would have risen so high that all the other mountains would have been under water.

Shot with the iPhone 6, and post-processed using Snapseed and Silver Efex Pro 2.


Donald:  I have this real estate in England, and I though that we can decorate that property with a bunch of stones.  We'll call it a Rock Garden.

Bill:  England, you say.  How far is that from here?

Donald:  Well Wales is about 160 miles to my property.  It's going to take us a few days to get there.

Bill:  Well, I could use a change of scene.  My uncle lives in Salisbury, and we could stop there for tea.

Donald:  Great.  After that.  I'll invite a fledgling rock and roll band to entertain us.  They will work for beer.

Bill:  Who would that be?

Donald:  I think they call themselves the Rolling Stones.


Okay so here we were on a rink boat on the lake called Loch Lomond, and I could not find a single float vest.  I was scared to be on the water.  Always have been.  I can't swim in the open sea or in a lake.  I am so scared of water that I would not even dare to drink it.  But after a few beers, I was willing to go along with the excursion.

Loch Lomond is is a freshwater Scottish lake, which contains many small islands.  One of the islands is famous because the outlaw Rob Roy MacGrrrregor was known to have hidden in the cave when the local Collection Agency went after him for not paying for the cattle, which he bought from the chief herder.

Trivia Notes:   Rob Roy was tall so casting the actor Liam Neeson as him was appropriate.  On the other hand, Braveheart William Wallace was very very tall for his time - about 6’-7” - so a 5’-10” actor Mel Gibson had to be photoshopped in the movie.

Shot with iPhone 6 … of course.

The Philosophy of People Watching


The Roman orator Marcus Antonius or commonly known as Mark Antony once wrote, "The admiration of the crowd is usually for natural objects, whose unity is due to inward hold or to organic growth."  Whatever he was drinking I would like to have it as well.

People watching is one of activity I like to indulge.  The technicolor Lucy-in-the-Sky-with-Diamond-the-Girl-with-the-Kaleidoscope-Eyes-John Lennon inspired image was shot with the iPhone 6 at Chester, England, an old Roman town.  Our tour director claimed that a city that has a suffix "ster" meant that the Romans have colonized that place.  Hence, Manchester and Worcester were Roman towns.  Adding the suffix "shire" meant it was in that county.  Worcestershire would be a County where the Romans settled.  It is also great for enhancing the flavor of fillet mignon and other beef cuts.  Hmmm ... yum.