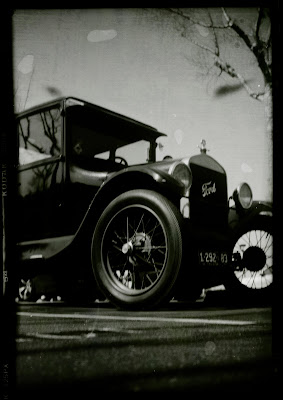 Taken with Kodak Jiffy... film 620 roll 125px
Thanks to Phyllis, for giving me this vintage camera...


A good friend of mine gave this camera to me. She originally bought it from an antique shop with the intent of displaying it along with her other vintage cameras. Fortunately for me, that intention never materialized as all the cameras ended in the hands of yours truly. I’ve taken special interest on this camera because of the age. Based on my research, some sources confirmed that this model was from 1933 to 1937. I think that’s pretty old even for your grandpa.
Basically, the Jiffy is a folding camera. In the shooting position, the camera folds out its bellows. The camera I’ve acquired is in good condition. I tested the bellows for light leaks by firing my flash inside the body of the camera. Done inside a relatively dark bathroom, I was pleasantly surprised to find no light leaking out from the bellows. Fold the camera back and it could easily fit on one’s coat pocket. The engineers from Kodak probably designed this as a travel camera.
Unlike most folders, there is no protective covering for the lens. The lens has only two position markers, mainly 5 to 10 feet and beyond 10 feet. Anything in between, one must guesstimate to focus. Lomographers who have been shooting with Holgas or Dianas would be at home operating the Jiffy.
The Jiffy is equipped with two viewfinders, one for taking horizontal shots and the other for vertical shots. On my camera, the viewfinders were badly scratched that I could only see a silhouette at best. They were still useful for composing a shot.
The camera uses a 620 roll film. For practical purpose, the manufacturing of this film has been discontinued. However, one can still get them through mail-order. Basically, these are re-spooled 120 roll that are sold to work as a 620 roll. Some information in the internet provides useful instruction on how to re-spool the 120 roll.
Shooting with this camera is a delight. One gets a bit wider or taller with the resulting images sized at 6 x 9. The sharpness of the positive images depends on how one set the focus. I was pleasantly surprised with the results from this camera. For a 70-year old camera, this Jiffy still delivers. When used with today’s films, it is like your grandpa running on steroids.
Email ThisBlogThis!Share to TwitterShare to FacebookShare to Pinterest
Labels: black and white, camera review, film, Lomography, Medium Format, Vintage Camera
Newer Post Older Post Home