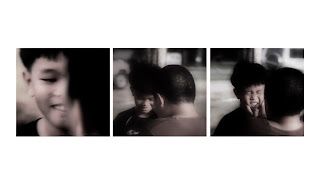 No that is not what you ate at your older sister’s wedding.  The concept of triptych (pronounced "tree- eep-tick”) may have been originated by Greek speaking artists during the medieval period.  The artists used the triptych as a writing tablet.  Very likely, it has three panels in which the middle panel is flanked by two folding outer panels.  Kind of like your grandmother’s purse.
Art triptychs have been around.  They can be found in the early Christian churches.  Modern artists Max Beckmann and Francis Bacon have used triptychs in their artworks.  Photographer Annie Leibovitz has used it to portray her father’s death.  But why did these artists depict their artwork in triptychs.  Let me offer a theory.  I think they wanted to be efficient.  Triptychs offer three images in a single viewing.  Dramatic images are shown like a comic book.  Although each image may tell a separate story, the combination of the images allows the artist to unify and clarify the intended message in the triptypch.
You may ask, “why should I present my lomos in triptych?”  For one thing, it looks cool.  Secondly, if you scan your own negatives, you get to scan them faster and more efficiently.  And thirdly, it can provide a story that you never intended.  How cool can that be?


Article appeared on Tipster of Lomography.com