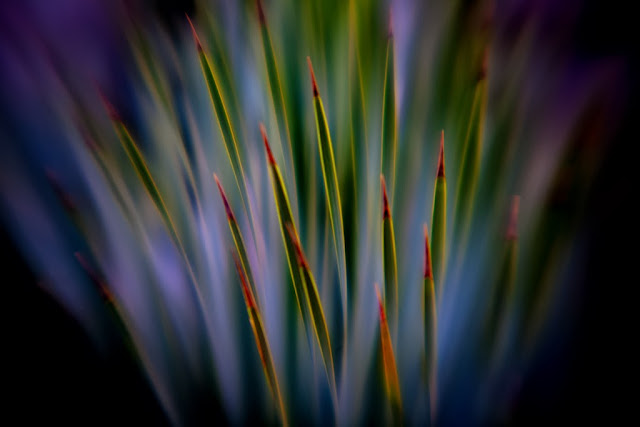 Spike Dee:  I have a photo op with Helmut Newton.  He said he can use an assistant.  Wanna come?

Juzno:  Nah, I'm doing the Dalai Lama.  I heard he wanted to show off his new perm.

Shot with Original Lensbaby. Hope your day is going great.

Glenn:  I recently saw a Helmut Newton exhibit at the Annenberg Space for Photography in Century City.  It was a bit awkward seeing some of his photos with my daughter, but in was interesting for her nonetheless.  I like how the spikes appear out of the bluish blur in the photo... some more Photoshopping magic?

Juzno:  Cheers, Glenn...  I know what you mean about Helmut Newton.  I simply used that reference because he was the first that came to mind when it came to glamour photography.  Interestingly I read that he never used artificial light in his photo op.  Just available light and that was it.  For the longest time I tried that approach and learned a lot about lighting.  But I felt there are situation when artificial light can improve the shot.

The spiky plant is the one near the district library.  I shot it last Friday after talking with you.  Actually my last shot for the day - which tends to be the best because I already warmed up.  No photo manipulation.  Just changed the white balance for cooler temperature and played with the saturation in post processing. Some dodge and burn on the corners to create vignette.  The blurry effect is in-camera using the Lensbaby.  Real simple approach.  Too simple that it surprises some people who think I spent hours in post-processing when it only took a few minutes.
Email ThisBlogThis!Share to TwitterShare to FacebookShare to Pinterest
Labels: canon 5d, lensbaby, macro, nature
Newer Post Older Post Home