I think this is art

Here's an "old" photo that I managed to mangle. I mean it's not that old since I shot this about a year and a half ago.  I was sauntering along the street of old town when I saw her through the window.  I immediately took a shot before she could notice what I was doing... so I did not really check what I got until I got home and downloaded it into my computer.  My initial urge was to try to fix it.  Sometimes I wonder why I bother to try to fix a botched shot.  The original looks like this... the lighting is fine but I can't stand that patch of green (lower right) behind the subject. 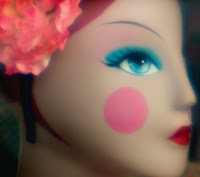 I tried to crop it and it started to look really ridiculous... I would have kept the cropped version but it was too compressed.  I felt like the poor dummy (no worry - she won't mind being called a dummy)was pressed in front of the lens.  That would have been fine but that wasn't the effect I was looking for.  So I finally settled for a dada-ish approach, which is basically to just rotate and distort the image until it starts to look totally absurd, and pretend that I knew what I was doing by calling it art.  He-he.

I also think you made art. But then I have a weird brain.