Look to the west and you might just find gold (Revisited) 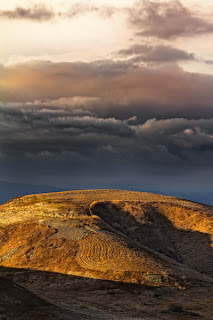 The title could have been "If everything fails, convert to Black and White". Except I'm not at that stage yet. Well, almost. I've belabored on the first image for so long that I think the Black and White nuclear option is the next step.

Last Monday I had a bit of time to do some post production photography. I was initially excited to see the results on this image of the golden hill (see left insert). It was taken a week earlier at my usual hangout -- on top of the office roof top. Yet the next day as I review the picture somehow that excitement had dwindled. I felt that the color was too pale for my taste – a huge departure from my usual style. I seem to want to darken the shadows and enhance the color of the clouds in the sky. I kept it the way it was thinking that my impression would change. I've also asked for comments from other people. After hearing what they said, I ended up revising it. Hence, the second image below. I think it's an improvement but now I think I've lost the grand composition of the first one in favor of a more cropped and saturated image on the second. I mean personally, I like them both but I felt I wasn't confident enough to share them. Anyway, here they are. I’m giving them a chance. If you have an opportunity, let me know what you think. (Be nice.)