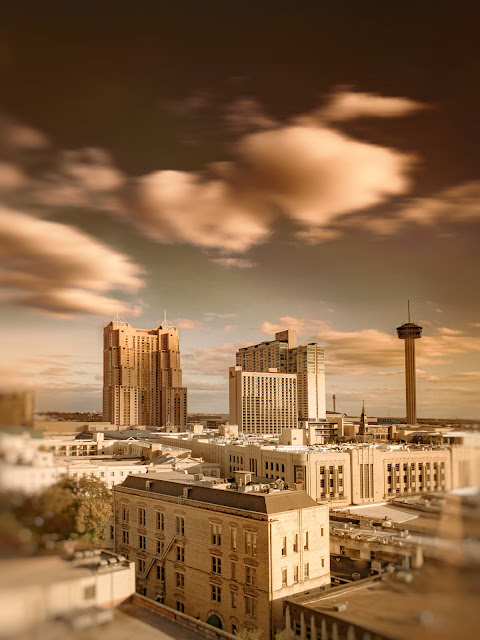 The image is Downtown San Antonio, well know for The Alamo.  A fortress originally established in 1718 as Mission San Antonio de Valero.  It's hard to find from this perspective as several high rises now have surrounded the fortress.  Trust me, it's tuck somewhere.

The historic place in Texas where the battle between the Texans and the Mexicans took place.  President General Antonio López de Santa Anna wanted to reclaim the Alamo because the Texans were getting filfthy rich after they drove off the Native Indians.  Thanks to the invention six shooter.  Okay, maybe I'm being sarcastic.  Well to make the long story short, the Mexicans defeated the Texans at Alamo.  Hence, the saying, "Remember the Alamo!"
Email ThisBlogThis!Share to TwitterShare to FacebookShare to Pinterest
Labels: architecture, blur, iPhone, Lightroom Mobile, street, travel, urban
Newer Post Older Post Home