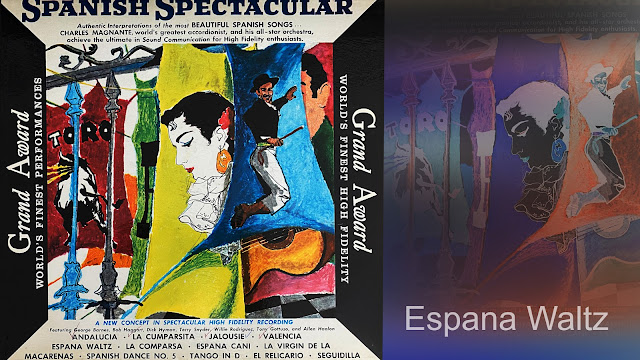 The song on this post starts with the accordion playing a classical Spanish riff that reminds me of Malagena. Only that it is distorted. That leads me to believe Magnante was the pioneer in heavy hard rock music. Hendrix must have been taking notes.

Espana Waltz means Spanish Waltz. It has its roots in English Country Dancing. By the 1820s the waltz had been thoroughly hybridized into country set dancing. According to Leilani Howard, Sacramento Ballroom Society, the Spanish Waltz ironically has nothing to do with Spain. As dance crazes spread across Europe and shortly thereafter America, music was written for them with gusto and diversity in all the countries a dance moved through [http://oslhp.net/2009/node/359].

The album Spanish Spectacular was a runtfrom the selection of used vinyl records that we were going through at our local record store. At first glance without hearing the music, I was not impressed by the artwork, which I thought was dated. And the recording was monoaural. There was not much redeeming value to the album but nonetheless we bought it just for fun. Turned out to be a gem.

Charles Magnante (December 7, 1905 – December 30, 1986) was an American piano-accordionist, arranger, composer, author and educator. His artistry helped raise the image of the accordion from an instrument considered suitable only for folk music to an instrument accepted in many music genres. (excerpt from Wikipedia https://en.wikipedia.org/wiki/Charles_Magnante) Bernardino Bautista Monterde (1880-1959) was a Spanish composer. Credits Accordion - Charles Magnante Featuring - Allen Hanlon, Bob Haggart, Dick Hyman, George Barnes, Terry Snyder, Tony Gottuso, Willie Rodriguez Orchestra - Charles Magnante And His Orchestra Record Album Artwork - Tracy Sugarman Owned or licensed by EMI Music Publishing, UMPG Publishing, Sony TV Publishing. Obviously I do not own the copyright to the music, the recording and the photos. (Video Artwork was appropriated from the original album. ) This video is posted for educational use under Section 17 U.S. Code § 107. Limitations on exclusive rights: Fair use.