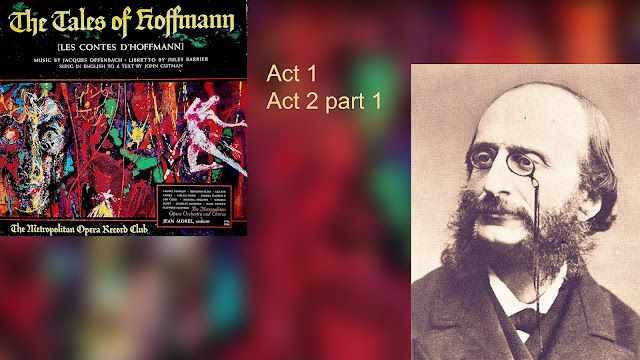 Another gem we acquired while going through used vinyl records at our local record store.  The album was accompanied by a Libretto printed in 1957.  Didn't know anything about Offenbach but we thought this would be a fun album to listen to.  I am not a big fan of Opera but after listening to the record several times I realized the story is entertainingly funny.  Cheap entertain if you ask me - $2.

The setting is in Germany.  Likely in the late 1800s.  It starts with students - presumably inebriated - singing rather boisterously about the power of wine and beer to bring joy and long life to mankind.  That in itself should give a hint where this is going.  Hoffmann, the German romantic poet, tells the story of three great loves of his life. All three were unhappy, and all three were destroyed by Hoffman's evil genius. The evil influence works through certain tricks of magic, and the whole atmosphere of the opera is highly imaginative and fantastic.

The opera is in three acts with a prologue and an epilogue.  This post is the first installment, which consists of Act 1 and a part of Act 2.  I plan to post three more installments - so if you enjoy this one as much as I did be expecting for the remainder of the music.

The account of Jacques Offenbach arriving in America to write this opera is in my opinion another story worthy of posting. I may write something about this in the future but for now I will devote more priority to the opera. Hope you will enjoy as much as I did.

Jacques Offenbach's The Tales of Hoffmann [Le Contes D'Hoffmann] The Metropolitan Opera Record Club (1957) Performed by The Metropolitan Chorus and Orchestra Libretto by Jules Barbier Sung in English to a Text by John Gutman Olympia - Laurel Hurley Giuletta - Rosalind Elias Antonia - Lucine Amara Nicklausse - Helen Vanni The voice of Antonia's mother - Sandra Warfield Hoffmann - John Crain Coppelius, Dappertutto, Dr Miracle - Martial Singher Crespel - Norman Scott Cochenille, Pittichinaccio - Charles Anthony Spalanzani - Paul Franke Schlemil - Clifford Harvuot Conductor - Jean Morel Prologue: Luther's tavern in Nuremberg, next door to the opera house where the reigning diva Stella is now singing in a performance of Don Giovanni. Act 1: Spalanzani's study, opening at the back of the gallery whose doors are closed by tapestry portieres. Act 2: Venice. A palace on the Grand Canal. Giuletta is entertaining guests, Hoffmann, Nicklausse and Pittichinaccio among them. Obviously I do not own the copyright to the music, the recording and the photos. (Video Artwork was appropriated from the original album. ) This video is posted for educational use under Section 17 U.S. Code § 107. Limitations on exclusive rights: Fair use.
Email ThisBlogThis!Share to TwitterShare to FacebookShare to Pinterest
Labels: classical music, iPhone, vinyl record
Newer Post Older Post Home