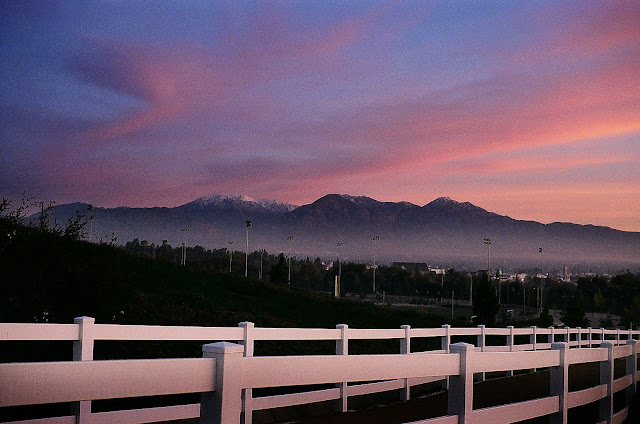 A year ago, I got into shooting with film cameras, and this was the time I started posting in Lomography.   This was not one of the image I posted, but it could have been.
The image was taken one morning while walking the dog.  I used an old Ansco Memar Pronto, Kodak Color Film 35 iso 800.  The camera did not have a light meter and you couldn't tell with the viewfnder if you were in focus.  So, I think I just set it to infinity at f8.  I tried to remember the Sunny f16 rule but I always get confused.  So I probably shot this at the fastest shutter speed, which would have been 1/200 or some fast speed (as in fast in that era).  I haven't touched the camera since then but looking at this image I think I'll bring it out again.  I'm really pleased with it and now I wondered why I never published it.  It's not a grand picture but I like how the colors came out.  It's grainy, and I like it that way.  The high iso is supposed to that.  Besides, it was shot in film.  There were no fancy post-processing except for subtle sharpening and un-sharpening.
I brought this up because I just found out today that my interview in Lomography has been published last month.  I don't frequent this site much anymore so I only found out today.
Here's the link if you want to read the crazy interview.  Cheers.
Email ThisBlogThis!Share to TwitterShare to FacebookShare to Pinterest
Newer Post Older Post Home