﻿﻿﻿
﻿﻿﻿This is one of my study shots on indoor lighting and perspective.  To get this shot, I used the following:


I mounted the camera on a table top tripod and positioned the lens as close as possible (a little more than an inch) to the pieces so I can get that distorted perspective.

The only sources of light were the indoor ambience and the incandescent lamp, which was at the left side of the chess board that provided the main lighting.  It cast a harsh shadow on the chess board so I needed to soften the light.  In order to diffuse it, I could do a couple of things.  I could place a cloth on the incandescent bulb - but since there was not much light to begin with covering it would mean raising the ISO on the camera to keep the exposure correct.  The other option was to bounce an additional light to the wall or ceiling as fill-in on the chess board.  The second option would allow me to keep the camera ISO low enough for better image quality.  ("Better" is really a relative word since shooting digitally at low ISO and long exposure time can also result in grainy artifacts.)

I didn't have a shoe mount flash that I could sync with the camera.  To solve this, I used a cheap Holga flash as an external source of light, which I could hold and manually bounce unto the ceiling.  Since the flash cannot sync automatically, I would need a window of time to manually fire the Holga flash while the subject is being exposed.

The low indoor light setting was advantageous as it would allow me to shoot at long exposure.  I set the camera at aperture priority.  At f8, the light meter in the camera indicated that I needed at least 1.6 seconds to expose the subject.  At this setting, the histogram on the camera shows the graph is at the extreme left, which means the exposure would be under.  This is actually good setting to start because I knew I was going to supplement with fill-in light.  I just hope that the fill-in light would be enough to compensate for my desired exposure, i,e. to get the graph on the histogram at the center.


I have a window of less than 2 seconds to manually bounce light from the Holga flash unto the ceiling.  I took advantage of the Panasonic's time-delay to give me a few more seconds to ready the flash.  I set the delay to 2 seconds.  Since I know that it would take about 1.6 seconds to expose the subject, I have less than 4 seconds to fire the flash once I hit the camera shutter.

My ceiling was high so I just hope for the best when I bounced the light.  With one hand, I held and positioned the flash with one finger on the trigger, while I hit the shutter button on the camera with the other hand.  (I only have two hands so...)   At time delay mode, the LCD display on the camera tells me when it will begin the exposure.  As soon as it indicated that the shutter went off, I immediately fired the flash unto the ceiling.

The first shot resulted in an underexposed image.  The Holga flash has a fixed power output so I couldn't adjust it further.   I increased the EV on the camera by +1/3 to compensate for the underexposure. This meant increasing the exposure time from 1.6 seconds to 2.2 seconds.  Not much of an increase but it should do the work.  It took a couple of more shots until I nailed it.

The image was captured in RAW so I didn't worry about the White Balance.  Besides, I didn't have correcting gel for the cheap flash.

I imported the file in Panasonic's software (some weird name I couldn't remember) and converted it to TIFF format.  Then I played around with the TIFF in Photoshop Elements (PSE).  Cleaned it up a bit with the clone tool and adjusted the tonal contrast.  The B&W rendition was an afterthought but I think it seemed to work well because of the contrast. 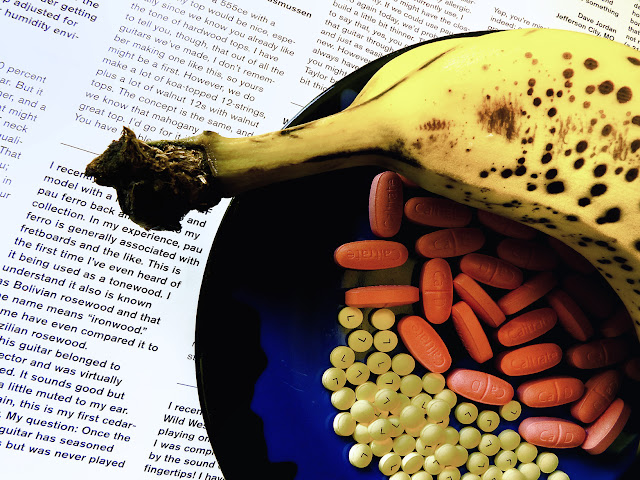