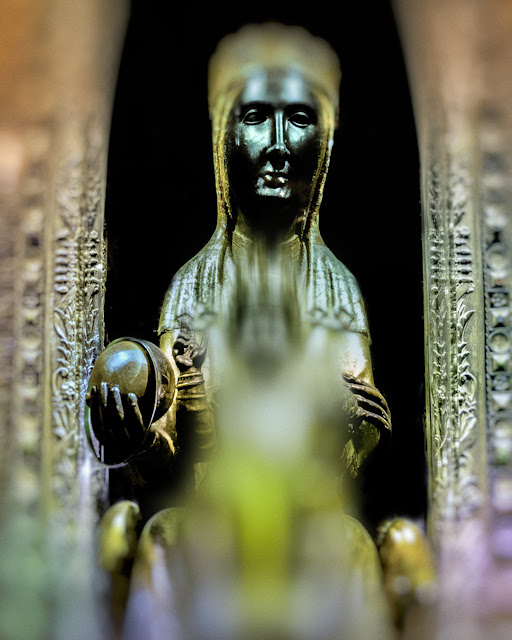 Rose's take on my rendition of the Madonna is that it looks scary.  I purposely blurred most of it because of my aversion to images portraying God or Christ Jesus.  (A baby Jesus was sitting on the Madonna's lap.)  I believe God would not be pleased if somebody painted or carved an image of him.  After all, nobody knows what he looks like.  How would you like it if somebody who has never seen a likeness of you draw your picture?  I think the Muslim religion has a similar tenet.  But that doesn't give me an excuse to create dull art.  I usually just avoid the subject.  However, in this case I wanted to document why people are lining up just to see the statue of the Madonna - which is mostly out of curiosity or believing she can grant the pilgrim's request.  I find the latter a sad state of affair of false hope and futility. People will sincerely do what they think is right for them.  But people can sincerely be misled.  But it doesn't matter what I think.

A bit of trivia on why the Madonna is black since most European rendition of her is she is fair skinned.  I was told that the statue is made of wood.  Its face was painted with lead-based cream colored paint.  The paint discolored through time because of oxidation.  That is why it is now mostly black.  I was going to first write about this bit of information when I started blogging on this image but I think I got distracted.
Email ThisBlogThis!Share to TwitterShare to FacebookShare to Pinterest
Labels: blur, iPhone, Northern Spain, Trafalgar, travel
Newer Post Older Post Home