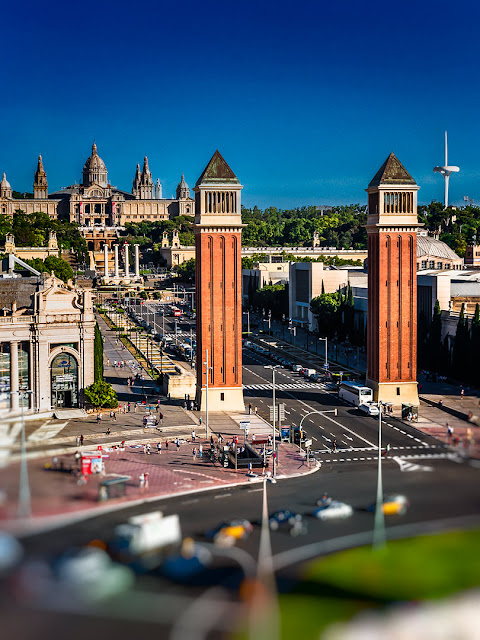 Each city in Spain has its own Plaza de Espana.  Maybe there is a plaza within the plaza.  Must have been seven or eight o'clock in the evening in Barcelona when I shot this image at the rooftop of the La Monumental, a renovated bullring arena that has been converted to a shopping mall.  In the past, the place was used for public hangings.  When that became boring, the Spaniards decided they would be better entertained with the murdering of bulls.  That too has been outlawed in Barcelona.

I researched the significance of the twin buildings.  They're the Venetian Towers, built for the 1929 International Exposition around the late 1920's just to say to the world that Barcelona can build anything they want.  They were made of cheap materials because they were meant to be demolished after the expo.

As one can see, the cityscape is not busy.  Not yet.  Night activities do not come alive until ten o'clock.  Only then the Spaniards would bring their familias to their favorite restaurants.  Anytime before that would just be the opened Tapas bars filled with urbanites nursing their beers and chewing on olives skewered unto a piece of octopus meat.  The Spaniards know how to live.  I am told that in Galicia one can survive with a thousand euros a month, an ordinary salary if you ask anyone.  A retired guy in our tour bounced to me an idea of living in Spain.  Why not?