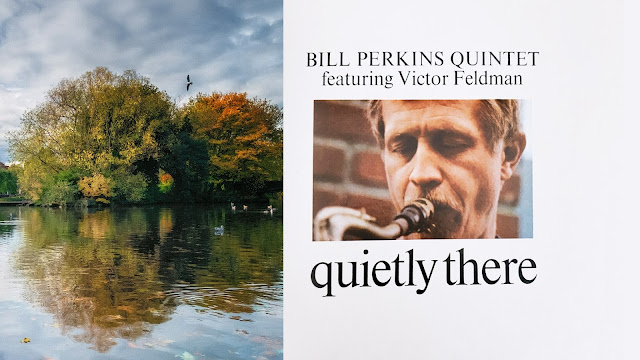 "The object of life is not to be on the side of the majority, but to escape finding oneself in the ranks of the insane." - Marcus Aurelius From the 1966 album Quietly There, it opens with the album’s title tune, “Quietly There,” from the film noir, HARPER, which starred Paul Newman as detective Lew Harper. Among the "coolest" of the West Coast tenor players of the 1950s, Bill Perkins in later years became a bit influenced by John Coltrane and modernized his style in a personal way. A flexible and versatile musician who also played baritone, alto, soprano, and flute, Perkins was best-known for his work on tenor. Born in San Francisco, he grew up in Chile, moved to Santa Barbara, and served in the military in World War II. After studying music and engineering, he played in the big bands of Jerry Wald, Woody Herman (1951-1953 and 1954), and Stan Kenton (1953-1954 and 1955-1958). "Perk" started recording as a leader in 1956 (most notably Grand Encounter with John Lewis), including sets with Art Pepper and Richie Kamuca. During the 1960s he had a dual career as a studio musician and a recording engineer, and during 1970-1992 he was a member of the Tonight Show Band. Since then, Perkins played baritone and tenor with the Lighthouse All-Stars and was a member of the Bud Shank Sextet, in addition to heading his own sessions for a variety of labels. (http://www.jazzmusicarchives.com/artist/bill-perkins) I do not own the copyright to the music, the recording and the photos. (Image post and video art were appropriated from the original album.) This video is posted for educational use under Section 17 U.S. Code § 107. Limitations on exclusive rights: Fair use. As much as possible, I attempted to remove most of the pops and crackles from the original vinyl album. Hope you enjoy. INXDS. #bebop #jazz #vinylrecord