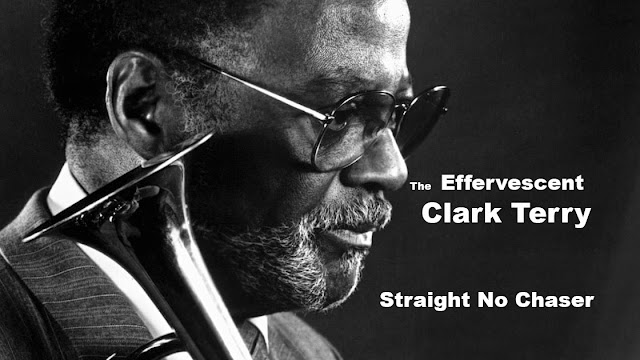 "What worries you, masters you." - John Locke From the vinyl album The Effervescent Clark Terry Clark Terry, trumpet, fluegelhorn, vocal Scott Bradford, piano Larry Gailes, bass Hartwig Bartz, drums Recorded live on 1975 at the Jazz House, Hamburg Clark Terry, jazz trumpeter, born 14 December 1920; died 21 February 2015 Righthanded, he taught himself to manipulate the valves with his left hand too, and could even play the trumpet upside down with the backs of the fingers of either hand. This enabled him to play flugelhorn in one hand and muted trumpet in the other, swapping four-bar exchanges with himself. Jazz has always involved a combination of aesthetics and athletics, and Terry had great mastery in both. Terry befriended Davis, who was six years younger, and was trusted by Davis’s father to take the teenage Miles to play at all-night jam sessions. Davis said of Terry: “I started to play like him. I idolised him.” The two men remained lifelong friends. Excerpt from Clark Terry Obituary, The Guardian @015/feb/22/clark-terry I do not own the copyright to the music, the recording and the photos. (Image post and video art were appropriated from Clark Terry obituary, The Guardian.) This video is posted for educational use under Section 17 U.S. Code § 107. Limitations on exclusive rights: Fair use. As much as possible, I attempted to remove most of the pops and crackles from the original vinyl album. Hope you enjoy. INXDS. #bebop #jazz #vinylrecord #quoteoftheday