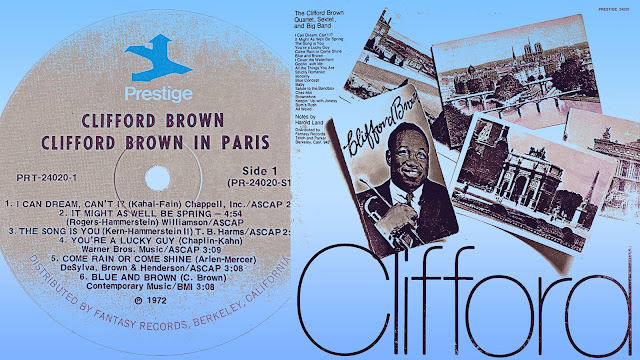 "Faith is to believe what you do not see; the reward of this faith is to see what you believe." - Saint Augustine From the vinyl album Clifford Brown in Paris Recorded October 15, 1953, reissued 1972 Clifford Brown, trumpet Henri Renaud, piano Pierre Michelot, bass Benny Bennett, drums "The Paris sessions were organized by French pianist Henri Renaud, who previously recorded with visiting American mainstream jazzmen such as Don Byas, Buck Clayton and Roy Eldridge but this time had become deeply involved in the more modern approaches to jazz which had developed." - Brian Blevins (excerpt from Liner Notes) Clifford Benjamin Brown (October 30, 1930 – June 26, 1956) was an American jazz trumpeter. He died at the age of 25 in a car accident, leaving behind four years' worth of recordings. His compositions "Sandu", "Joy Spring", and "Daahoud"have become jazz standards. Brown won the Down Beat magazine Critics' Poll for New Star of the Year in 1954; he was inducted into the DownBeat Hall of Fame in 1972. I do not own the copyright to the music, the recording and the photos. (Image post and video art were appropriated from the original album.) This video is posted for educational use under Section 17 U.S. Code § 107. Limitations on exclusive rights: Fair use. As much as possible, I attempted to remove most of the pops and crackles from the original vinyl album. Hope you enjoy. INXDS #bebop #jazztrumpet #vinylrecord