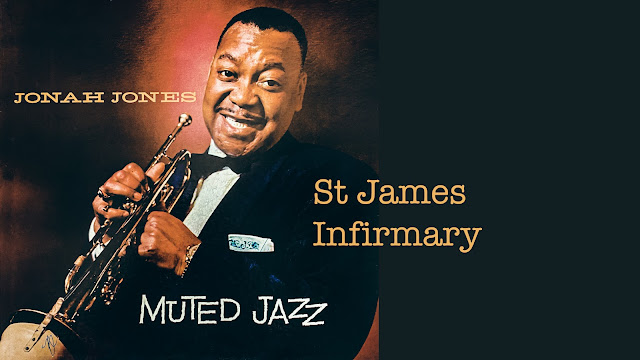 "When you come to a roadblock, take a detour."  -  Barbara Bush

From the vinyl LP “Muted Jazz” released in 1957.  "St. James Infirmary Blues" aka "Gambler's Blues" is an American blues song of uncertain origin.  The first time I heard this song was from a cartoon animation showing a down and out clown.  At an early age, I thought that was the darkest and most depressing cartoon I've ever seen.  I can still remember it after all these years.  Later on I understood what it was about.

See my little baby there

She's stretched out on a long, white table

Well she looks so good, so cold, so fair

Wherever she may be

You may search this whole wide world over

But she'll never find another sweetheart like me, yeah

Take apart your bones and put 'em back together

Tell your mother that you are somebody new

Feel the breeze blow and tell 'em all, "Look out here it comes!"

Now I can say whatever I feel like to you

Then keep me six crap-shooting pallbearers

Let a girl sing me a song

Hallelujah as we go along, well

Well folks, now that you have heard my story

Now that you heard my song

Say bartender, give me another shot of that booze

'Cause I've got some of those St. James Infirmary blues

Got to love this vocal rendition.

Jonah Jones (born Robert Elliott Jones; December 31, 1909 – April 29, 2000) was a jazz trumpeter who created concise versions of jazz and swing and jazz standards that appealed to a mass audience.

There was a time when jazz fans would consider Jonah Jones as one of the the best trumpeters, hence being called “Louis Armstrong II.”  Jones did get musical inspiration from the great Satchmo. Those were the heydays of the mainstream jazz era when jazz people would hang out in small bar to hear a small jazz combo, a format favored by Jonah Jones.

Also an outstanding singer, his rendition of St James Infirmary is exceptional.  Unfortunately, his vocal rarely was allowed to stretch out on his recordings.

Shame on the Capitol catalog.  Muted Jazz is top-of-its-class album that has never been released in CD or even MP3 format.  This channel aims to promote jazz artists that some recording companies have forgotten. One reason why all music posted here are from restored vinyl records.