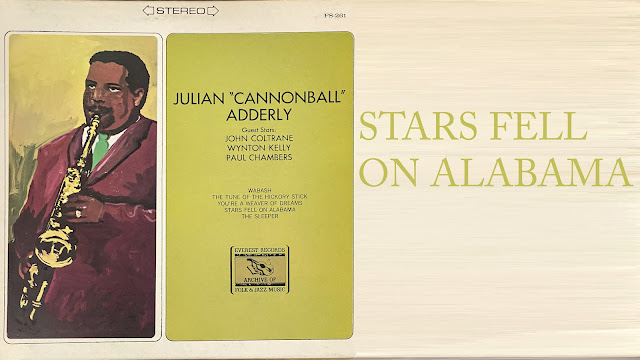 With guests JOHN COLTRANE, WYNTON KELLY and PAUL CHAMBERS Julian Edwin "Cannonball" Adderley (September 15, 1928 – August 8, 1975) was an American jazz alto saxophonist of the hard bop era of the 1950s and 1960s. His nickname “Cannonball” was supposedly derived from the word “cannibal,” which his friends called him because of his massive appetite. Adderley is perhaps best remembered for the 1966 soul jazz single "Mercy, Mercy, Mercy”, which was written for him by his keyboardist Joe Zawinul and became a major crossover hit on the pop charts. A cover version by the Buckinghams also reached #5 on the charts. Adderley worked with Miles Davis, first as a member of the Davis sextet, appearing on the seminal records Milestones (1958) and Kind of Blue (1959), and then on his own 1958 album Somethin' Else. He was the elder brother of jazz trumpeter Nat Adderley, who was a longtime member of his band. I do not own the copyright to the music, the recording and the photos. (Image post and video art are from John Levin Enterprises. The photo is in the public domain in the United States because it was published in the United States between 1926 and 1977, inclusive, without a copyright notice.) This video is posted for educational use under Section 17 U.S. Code § 107. Limitations on exclusive rights: Fair use. All posts are rendered in old school using restored vinyl LPs. This channel does not use recordings from CDs. As much as possible, I attempted to remove most of the pops and crackles from the original vinyl album. Some remastering was applied to make the performance cut through within the confines of the loudness wars. Hope you enjoy. INXDS #bop #jazzsax #vinylrecord