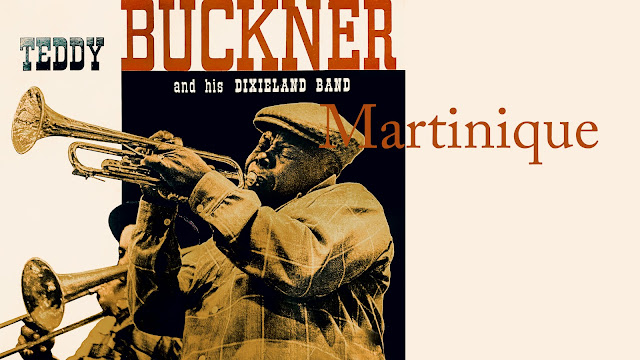 From the vinyl LP Teddy Buckner and his Dixieland Band.

Teddy Buckner (July 16, 1909 in Sherman, Texas – September 22, 1994 in Los Angeles, California) was an American jazz trumpeter associated with Dixieland music. Early in his career Buckner played with Sonny Clay. He worked with Buck Clayton in Shanghai in 1934, and later worked with Benny Carter among others. From 1949 to 1954, he worked in Kid Ory's band, which was perhaps the closest to the style he preferred. In the late 1950s his work with Sidney Bechet in France made him popular there but, before going to France, he recorded the soundtrack of the movie King Creole with Elvis Presley in 1958. From 1965 to 1981 he performed with his traditional Dixieland jazz band at Disneyland's New Orleans Square. In addition to this he worked with blues musician T-Bone Walker and did some acting. This included an uncredited role in They Shoot Horses, Don't They? He played cornet in a few of his film roles. I do not own the copyright to the music, the recording and the photos. (Image post and video art were appropriated from original album.) This video is posted for educational use under Section 17 U.S. Code § 107. Limitations on exclusive rights: Fair use. All posts are rendered in old school using restored vinyl LPs. This channel does not use recordings from CDs. As much as possible, I attempted to remove most of the pops and crackles from the original vinyl album. Some remastering was applied to make the performance cut through within the confines of the loudness wars. Hope you enjoy. INXDS #neworleansjazz #dixieland #jazztrumpet #vinylrecord