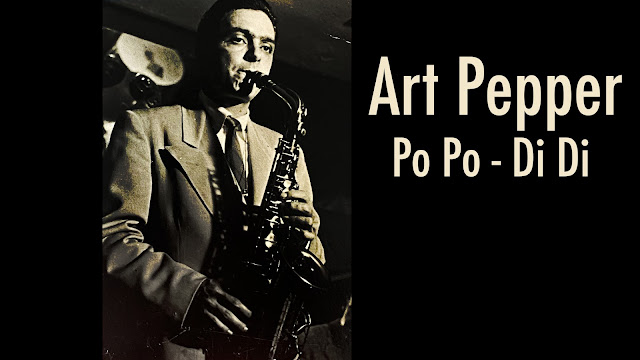 Art Pepper -  Po Po /  Di Di  (vinyl record)
From the vinyl LP Pacific Jazz, featuring THE ART PEPPER NINE Art Pepper/ Alto Sax Stu Williamson/Valve Trombone Don Fagerquist/Trumpet Bill Holman/Tenor Sax Bud Shank/Baritone Sax Red Callendar/Tuba Russ Freeman/ Piano Monte Budwig/Bass Shelly Manne/Drums Composed, Arranged and Conducted by Shorty Rogers
Art Pepper, born in Gardena, California on September 1, 1925 and raised in nearby San Pedro, began playing clarinet at age 9 and, by 15, was performing in Lee Young's band at the Club Alabam on Central Avenue, the home of jazz in prewar Los Angeles. He joined Stan Kenton's band, touring the U.S. and gaining fame, but was drafted in 1943 serving as an MP in London and performing with some British jazz bands. He returned to the States and to Kenton, touring and recording. In 1952 he placed second only to Charlie Parker in the Down Beat jazz poll. Probably his most famous recording from that period is his stunning performance of 'Art Pepper,' written by Shorty Rogers (as part of a series of charts Kenton had commissioned to feature members of his band).
Art left Stan Kenton in 1951 to form his own group, occasionally recording for Rogers and others. He signed with Contemporary Records in 1957.
From the beginning Art's playing combined a tender delicacy of tone with a purity of narrative line—a gift for storytelling that was made irresistible by an inherent, dancing, shouting, moaning inability to ever stop swinging.
I do not own the copyright to the music, the recording and the photos. This video is posted for educational use under Section 17 U.S. Code § 107. Limitations on exclusive rights: Fair use.
All posts are rendered in old school using restored vinyl LPs. This channel does not use recordings from CDs. As much as possible, I attempted to remove most of the pops and crackles from the original vinyl album. Some remastering was applied to make the performance cut through within the confines of the loudness wars. Hope you enjoy. INXDS. #jazzsax #vinylrecord
Email ThisBlogThis!Share to TwitterShare to FacebookShare to Pinterest
Labels: jazz, vinyl record
Newer Post Older Post Home