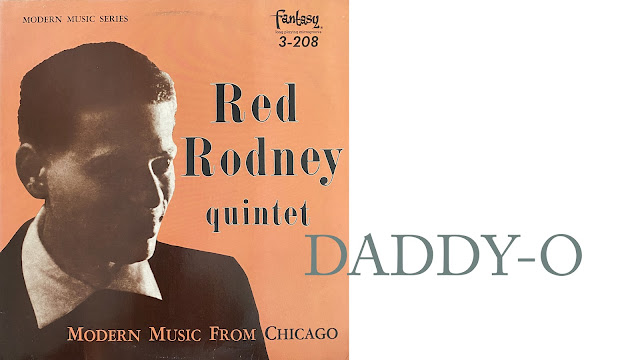 This record was recorded at the Universal Studios Chicago in the latter part of June 1955. Red Rodney was working at the Bee-Hive, one of Chicago's top jazz nite spots. Using the same side-men on the recording dates as he was at the club, the results were behooving to all concerned Red Rodney was born in Philadelphia 29 years ago and hit the big time when only 16 with one of the famous Benny Goodman editions. Experience followed in the big and small combos of innumerable top band leaders, most notably Krupa, Elliot Lawrence, Ventura, Herman, and of course, CHARLIE PARKER! Quite naturally, it was during this almost two-year association with Bird (shared also by our specially imported drummer for this date, Roy Haynes), that all of Red's previous experience was further developed and enhanced. It was here that he musically matured. We can first remember Roy Haynes as the booting drummer with one of those fantastically swinging combos Lester Young always has. And those wonderful patterns he laid down on those famous Bud Powell sides are still amazing. Roy's versatility and swinging taste are goals for which other drummers strive, yet which come off so easy, as witness his solo on "Clap Hands, Here Comes Charlie," a song made famous by his ex-boss, Lester "Prez"Young. (Liner Notes, Joe Segal)

He accepted an invitation from Charlie Parker to join his quintet and was a member of the band from 1949–1951. Being the only white member of the group, when playing in the southern United States he was billed as "Albino Red" as a ruse to avoid prejudice against mixed race musical combos. During this time he recorded extensively.