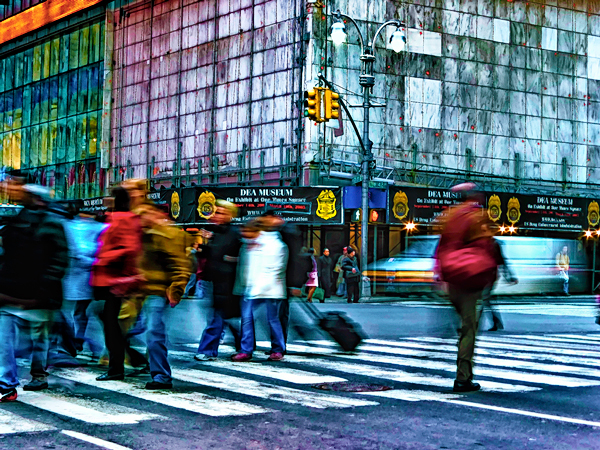 Nearly a decade ago, Rose bought our first digital camera - a Canon PowerShot SD40.  Market value at $500 at that time.  I complained that it was too expensive but I got sold into its neat features:  Digital (so no film required), less than 4MP (nowadays 10MP is the minimum), almost all metallic parts (so it was still heavy but not as heavy as a 35mm SLR), pocketable (it was actually three times the size of most current point and shoot camera - so one really needed a huge pocket to fit the SD40).  That camera is long dead.  The shutter is shut and it was cheaper to get a new one.

I've dug this one from the archive.  Shot with this camera.  I'm still amazed at the pictures it produced.  This image was taken at very low speed but the clarity of the traffic light and the guy underneath it beats some of my shots taken with my more expensive cameras and pro-lens.  I like it when the image has contrasting blur and sharpness.  This was taken in 2005 while sauntering on the streets of Manhattan.  I think it was at Times Square.  Not really sure.