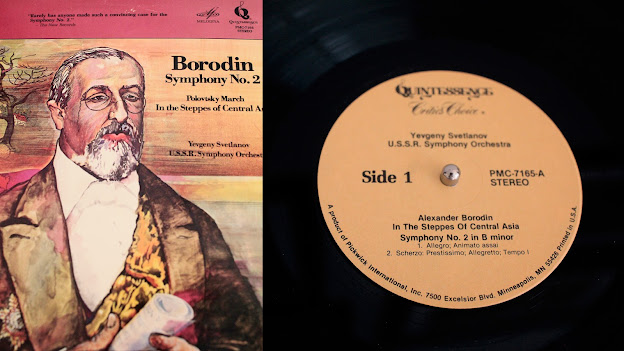 Alexander Borodin, doctor, chemist, professor, composer, bartender.  Try to top that in your business card.  His day job was a doctor and a chemist.  When he was bored, he taught and chased women at the School of Medicine for Women, a school he founded in Saint Petersburg.  At nights, he would be a mixologist - creating cocktails for the Czar and his friends.  On his spare time or when was ill, he composed music.  His best known works are arguably Symphony No 2 in B minor and Prince Igor.

It took him six years to write Symphony No 2 - between 1869 and 1876. It consists of four movements and is considered the most important large-scale work completed by the composer himself.

Symphony No 2 has four movements but I divided the music into three parts:

This video post consist of the first movement. But please be sure to follow the links for the rest of the music.

I do not own the copyright to the music and the recording. Photos used on post was appropriated from the original album . Video clip of spinning LP is mine. This video is posted for educational use under Section 17 U.S. Code § 107. Limitations on exclusive rights: Fair use.