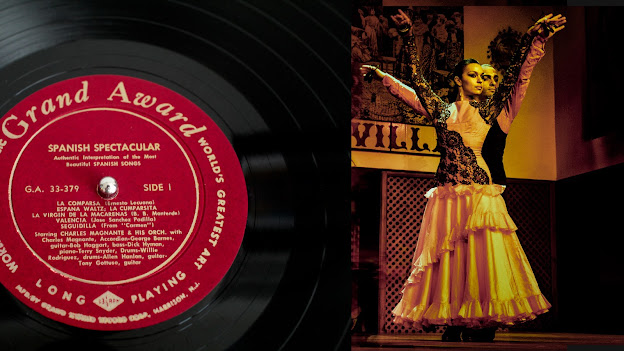 Whether or not we know La Comparsita, we often think of Tango when we hear this song.  A lot of chatters have been spoken about the origin of La Comparsita. I'm not going into that but a rather interesting piece in Wikipedia was written about the song. We all know the trustworthiness of Wikepedia. Or not.

"The song was originally a march, whose melody was composed in early 1916 by an architecture student in Montevideo, an 18-year-old man named Gerardo Hernán "Becho" Matos Rodríguez, the son of Montevideo's Moulin Rouge nightclub proprietor Emilio Matos. On 8 February 1916, Becho and his friend show the music to orchestra leader Roberto Firpo.  He looked at the music and quickly determined that he could make it into a tango... Years later, Firpo reported the historic moment as follows:

deo, when one day a man was accompanied by about fifteen boys — all students — to say he brought a carnival march song and they wanted me to review it because they thought it could be a tango. They wanted me to revise and tweak the score that night because it was needed by a boy named Matos Rodríguez."

The album Spanish Spectacular was a runt from the selection of used vinyl records that we were going through at our local record store. At first glance without hearing the music, I was not impressed by the artwork, which I thought was dated. And the recording was monoaural. There was not much redeeming value to the album but nonetheless we bought it just for fun. Turned out to be a gem.

Charles Magnante (December 7, 1905 – December 30, 1986) was an American piano-accordionist, arranger, composer, author and educator. His artistry helped raise the image of the accordion from an instrument considered suitable only for folk music to an instrument accepted in many music genres. (excerpt from Wikipedia https://en.wikipedia.org/wiki/Charles_Magnante) Credits Accordion - Charles Magnante Featuring - Allen Hanlon, Bob Haggart, Dick Hyman, George Barnes, Terry Snyder, Tony Gottuso, Willie Rodriguez Orchestra - Charles Magnante And His Orchestra Record Album Artwork - Tracy Sugarman I do not own the copyright to the music and the recording. Cover art and video clip of spinning record are mine. The clips of the awkward dancing is from Cottonbro in Pexels. This video is posted for educational use under Section 17 U.S. Code § 107. Limitations on exclusive rights: Fair use.