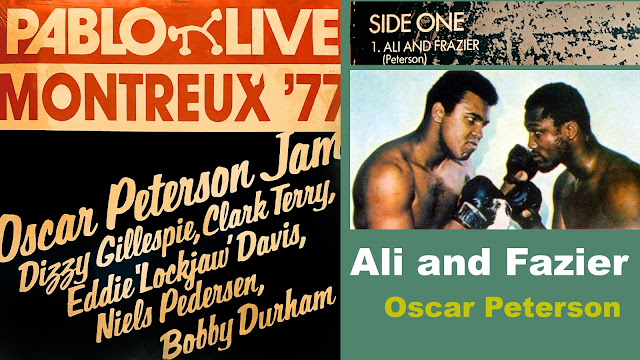 It was March 8, 1971 in New York. One of the greatest boxing match was to take place at Madison Square Garden. In one corner, the defending heavy weight world champion – “Smokin’” Joe Frazier. And in the other corner, the contender Muhammad Ali. It had been 3 ½ year since Ali fought - a long time to be away from the ring - due to his refusal to take part in the Vietnam War. By the 15th round, the fight was even. Then in one defining moment Frazier landed a left hook on Ali. Ali got knocked down and the fight was over. Frazier was able to defend his title by unanimous decision. Oscar Peterson wrote and recorded “Ali and Frazier” in a 1977 concert at the Montreux Jazz Festival, Montreux, Switzerland Oscar Peterson - piano Eddie “Lockjaw” Davis - saxophone Clark Terry and Dizzy Gillespie - trumpet Niels-Henning Orsted Pederson - double bass Bobby Durham - drums. I do not own the copyright to the music, the recording and the photos. (Image post and video art were appropriated from the original album and the promotional photo for the Ali-Frazier Fight.) This video is posted for educational use under Section 17 U.S. Code § 107. Limitations on exclusive rights: Fair use. As much as possible, I attempted to remove most of the pops and crackles from the original vinyl record. Hope you enjoy. sDg. #bebop #jazz #jam #vinyl #vinylrestored