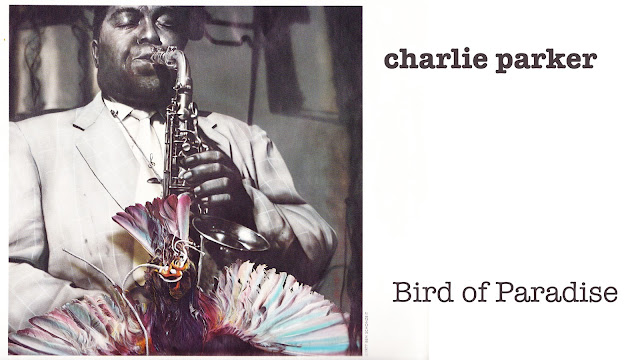 "Everyone has a plan 'till they get punched in the mouth." - Mike Tyson “Bird of Paradise”, is based on the chord changes to “All The Things You Are” (by Jerome Kern and Oscar Hammerstein II), a popular song from the ‘40s with an unusually complex harmonic progression that quickly became one of the most well-known standards in jazz history. [ excerpt https://medium.com/@gemsofjazzblog/today-in-jazz-history-october-28th-aeb5afb06583 ] Alto Saxophone – Charlie Parker Bass – Tommy Potter Drums – Max Roach Piano – Duke Jordan Trumpet – Miles Davis Recorded October 28, 1947 Charles Parker Jr. (August 29, 1920 – March 12, 1955), nicknamed "Bird" and "Yardbird", was an American jazz saxophonist and composer. Parker was a highly influential soloist and leading figure in the development of bebop, a form of jazz characterized by fast tempos, virtuosic technique, and advanced harmonies. Parker was a blazingly fast virtuoso and introduced revolutionary harmonic ideas into jazz, including rapid passing chords, new variants of altered chords, and chord substitutions. Parker acquired the nickname "Yardbird" early in his career on the road with Jay McShann. This, and the shortened form "Bird", continued to be used for the rest of his life, inspiring the titles of a number of Parker compositions, such as "Yardbird Suite", "Ornithology", "Bird Gets the Worm", and "Bird of Paradise". Parker was an icon for the hipster subculture and later the Beat Generation, personifying the jazz musician as an uncompromising artist and intellectual rather than just an entertainer. I do not own the copyright to the music, the recording and the photos. (Image post and video art were appropriated from the original album The Very Best of Bird.) This video is posted for educational use under Section 17 U.S. Code § 107. Limitations on exclusive rights: Fair use. As much as possible, I attempted to remove most of the pops and crackles from the original vinyl album. Hope you enjoy. INXDS. #bebop #jazz #vinylrecord #quoteoftheday