Manhattan Skyline with Reflection and the Strange Things that Happened Before 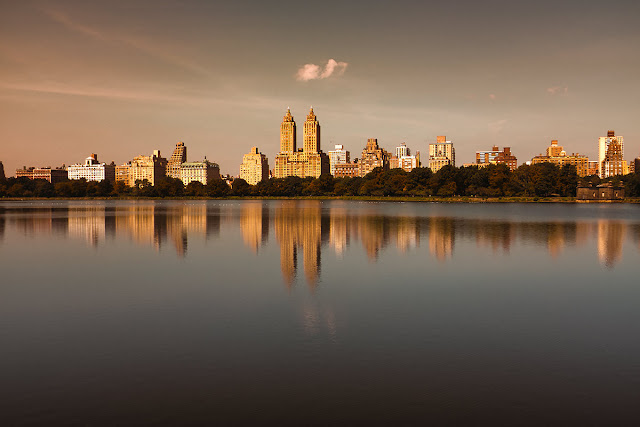 Image was taken across the Jacquelin Kenedy Onasis Reservoir at Central Park, New York.  The reservoir is 40 feet deep and holds a billion gallons of water.  Seen here is Manhattan, often described as the cultural, financial, media, and entertainment capital of the world.  In capturing this image, I used my Fujifilm Finepix 100F with the Classic Chrome Film Simulation.


Our first day in New York was a fiasco.  Arrived at JFK Airport around midnight.  Our luggage came out looking like a mad tribesman pounded it to smitheerns.  After waiting patiently for about an hour, the luggage clerk came back with an ugly boxy replacement where the wheels would only go in one direction.  It was so huge that other airlines might not even allow us to check it in.  Shell shocked and lack of sleep, we decided to just accept it.

We went outside to get a taxi and a big black guy looking like Shaquille O'Neal introduced himself as a taxi driver so we told him where we were going.  We hauled our damaged luggage and the ugly replacement as he took us to the deserted parking lot - like sheep being led to a slaughterhouse.  We began to get suspicious because we couldn't find the usual yellow taxis we're used to.  And then he showed us his van.  That's not a taxi, we said.  Well, it's Uber, he claimed it is cheaper.  Bluntly, I told him we don't have much money in case he was going to rob us.  He smiled and seemed okay with us.  We did get to our destination.  I'm glad to report that we didn't get kidnapped although he took most our cash.  Ouch. 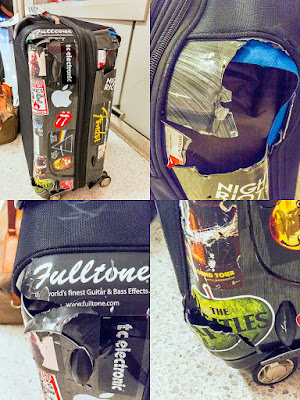