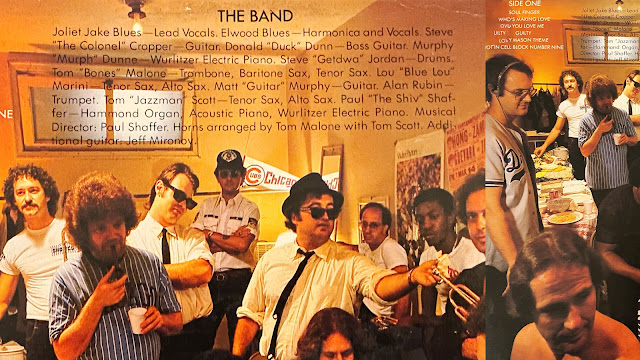 "It is rock and roll. That's all I know. And that's all I'm good at. I am terrible plumber" - Keith Richards Elwood Blues : “All right people. the rest of the hard working all star Blues Brothers are gonna be out here in a minute, including my little brother Jake. But right now, I'd like to talk a little bit about this tune you're hearing. This is of course the Green Onions tune. It was a very big hit in the early sixties in this country. And of course it was composed and recorded in Memphis, Tennessee, right here in the United States of America. You know, people, I believe that this tune can be equated with the great classical music around the world. Now you go to Germany, you've got your Bach, your Beethoven, your Brahms... here in America you've got your Fred Mcdowell, your Irving Berlin, your Glenn Miller, and your Booker T & the M’Gs. Another example of the great contributions in music and culture that this country has made around the world. and as you look around the world today, you see this country spurned. “You see backs turned on this country… well people, I'm gonna tell you something, this continent, North America, is the stronghold! this is where we're gonna make our stand in this decade! yeah, people I've got something to say to the state department. I say take that archaic Monroe doctrine, and that Marshall plan that says we're supposed to police force the world, and throw 'em out! let's stay home for the next ten years people! Stay right here in North America and enjoy the music and culture that is ours. Yeah, I got one more thing to say. I'm just talking about the music, people, and what it does to me. And that is, as you look around the world, you go to the Soviet Union or Great Britain or France, you name it, any country... everybody is doing flips and twists just to get into a genuine pair of American blue jeans! and to hear this music and we got it all here in America, the land of the Chrysler 440 cubic inch engine!” Made in America is the third album by The Blues Brothers. The second live album by the band, it was released in December 1980 as a followup to their hit film released that year, The Blues Brothers. To support the film, the band embarked on a 22 dates tour in North America, culminating with seven dates at the Universal Amphitheater in Los Angeles. Released in December 1980, Made in America was the Blues Brothers' third consecutive album to enter the Billboard top 50. Made in America was the band's last album in its original incarnation. I suspect jazz purists might complain that the song Green Onions is not jazz. Perhaps, but definitely jazz-influenced. Moreover, it was created in the States, the land where 8-cylinder muscle cars and Blue Jeans were born. I do not own the copyright to the music, the recording and the photos. (Video Artwork was appropriated from the original vinyl LP. This video is posted for educational use under Section 17 U.S. Code § 107. Limitations on exclusive rights: Fair use. As much as possible, I attempted to remove most of the pops and crackles from the original vinyl album . Hope you enjoy. INXDS. #bluesbrothers #madeinamerica #vinylLP #qouteoftheday