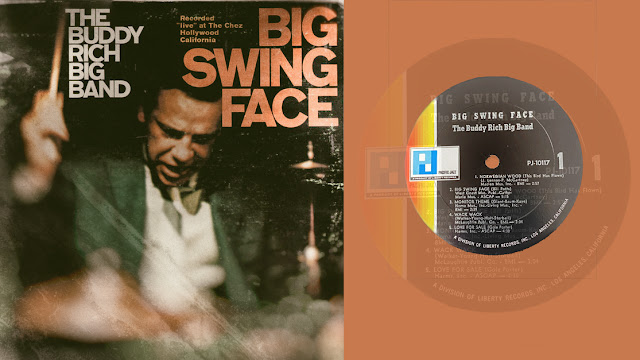 "Vultus est index animi." - (The face is the index of the soul.)

The Buddy Rich Big Band Big Swing Face (Bill Potts) From the album of the same title, recorded live in 1967 at The Chez, Hollywood California. Rich's technique, including speed, smooth execution and precision, is one of the most coveted in drumming and has become a common standard. Gene Krupa described him as "the greatest drummer ever to have drawn breath". Rich's influence extended from jazz to rock music and jazz fusion. He influenced drummers John Bonham of Led Zeppelin, Carl Palmer of Emerson, Lake & Palmer, Ian Paice of Deep Purple, Tré Cool from Green Day, and Bill Ward of Black Sabbath. Phil Collins stopped using two bass drums and started playing the hi-hat after reading Rich's opinion on the importance of the hi-hat. Roger Taylor, drummer of Queen, acknowledged Rich as the best drummer he ever saw for sheer technique. Blink-182 drummer Travis Barker has credited Rich as the greatest drummer of all time. Buddy Rich was among hundreds of artists whose material was reportedly destroyed in the 2008 Universal fire. [excerpt from wikipedia https://en.wikipedia.org/wiki/Buddy_Rich] : : I do not own the copyright to the music, the recording and the photos. (Image post and video art were appropriated from the original album.) This video is posted for educational use under Section 17 U.S. Code § 107. Limitations on exclusive rights: Fair use. As much as possible, I attempted to remove most of the pops and crackles from the original vinyl album . Hope you enjoy. INXDS #bebop #jazz #vinylrecord