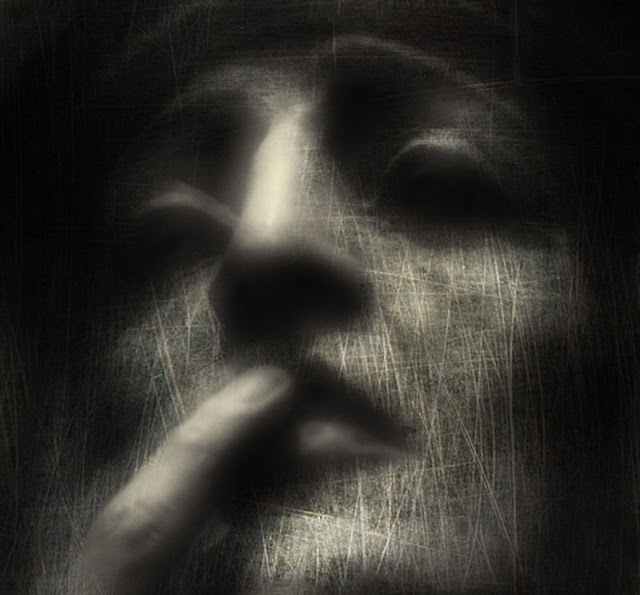 I made this art a few months ago but held back in posting it because I wasn't sure if I really like it that much.  For me, posting one's art in the web is like posting a picture of your girlfriend, or your newborn... it's motivated by pride and joy.  The Hurt is something I feel ambivalent about.  The technique I used here is not that elaborate... added some scratches to her face... did some makeover.  Yet, there is something that I like about her.  Maybe her dark almost lifeless eyes.  Her soft finger pressed to her lips?  It seems that sometimes when I look at her I think about a post-modern version of the Madonna.  I showed it to Rose and she liked it (and she can be brutal in providing criticism).
A few days ago, I posted The Hurt in Flickr, RedBubble and deviantArt.  The first two sites produced modest views and decent comments but in dA it received stacks of compliments.  As I write this post, it has already 124 comments, 571 faves and 4,425 faves.  All except one comment were favorable.  That one lone comment stated that it was mediocre at best.  She's probably right.  I think it is.  But the ones I usually like does not translate into big hits (I'll write more about that subject next time).
Cheers.
Update November 30, 2010 in deviantArt: 132 comments, 609 favorites, 6504 views
Email ThisBlogThis!Share to TwitterShare to FacebookShare to Pinterest
Labels: angst and uncertainty, black and white, canon rebel xt, corel paint shop pro x2, lensbaby, plastic optics, shameless self-promotion
Newer Post Older Post Home