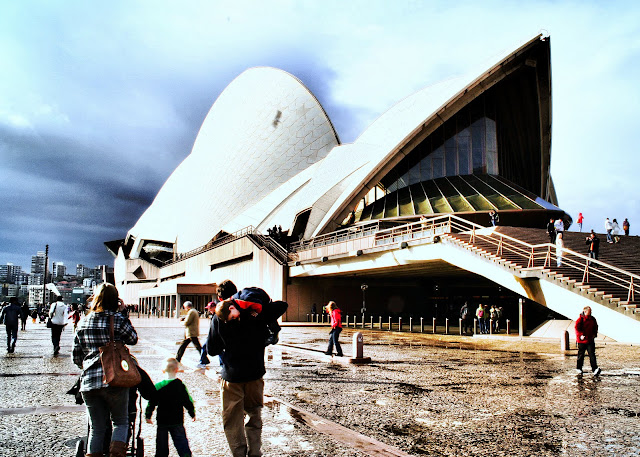 Prologue: Since coming back from Sydney, I've been hoping to create a photo chronicle of our stay there.  That I believe will remain mostly a hope.  There are just so many things one can do in a day.  Heh.  So instead of providing a chronicle, I would do it piece meal. The postings will not be coherent at a glance but I decided to label each post as "Sydney Chronicles".  By clicking on this label(which appears somewhere in the lower part of this page), the viewer will be able to see all the related postings concerning this matter.  (Thanks to the brilliance of xtml and all that computer innovations.)
I'm going to start this chronicle with this photo.  It was not taken on the first day but I think the image showing the Opera House is a giveaway of where it was taken, hence I'll start with it.  This was just a random shot.  I don't even know the family on the picture.  But I like the image because I think it gives a sense of being there.  No fancy photo manipulation.  None of that artistic blurs that Juznobsrvr is infamous for.  Heh.  I like to call this my "straight shot", which I'll be mostly posting for the rest.
Also, I like this shot because of the perspective. There is a sense of wideness and depth. I used the 18-55mm crappy kit lens on the old Canon Rebel XT (350d).  I believe I had it at 18mm, so effectively the shot was at 29mm because of the crop factor (the Rebel series of Canon has about 1:1.6 sensor ratio to full frame images). At 29mm focal point, it's still not bad... I would consider it wide angle.
It just rained I think when I shot this so I like the glittery ground.  The sky was not that blue as far as I remember but it looks great in here.
More to come (hopefully)...

Read the rest of the Sydney Chronicles.