There are no fat people in Sydney 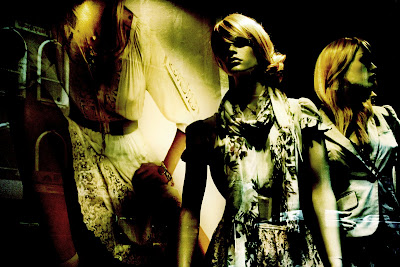 I've not visited the other parts of Oz so I can only comment on my observation of Sydney.  Unlike here in the States, I didn't really see fat people in Sydney.  Just to prove my point, I took a picture of the denizens (see image).  You will see that they're gorgeous, blond and have great complexion.  Even in the cold of winter, these blond babes were stylishly dressed like it was summer. Years ago, they would have been the paragons of California beauty.  Young, carefree and almost aloof (until you talk to them).  Nowadays, California is full of fat and horribly affable people.  What happened?  All one need to do is look around and notice the burgeoning fast food chains.  Every block has at least half a dozen. This is true across the States.

Things could change though for Sydney.  I noticed a couple of Happy Jack's (Burger King here in the States) and Big Macs along St George. Not as many compared to California but it would be interesting to see how things hold up in Sydney in a few years.
Read the rest of the Sydney Chronicles.
Email ThisBlogThis!Share to TwitterShare to FacebookShare to Pinterest
Labels: 18-55mm kit lens, canon rebel xt, corel paint shop pro x2, sydney, sydney chronicles, urban
Newer Post Older Post Home