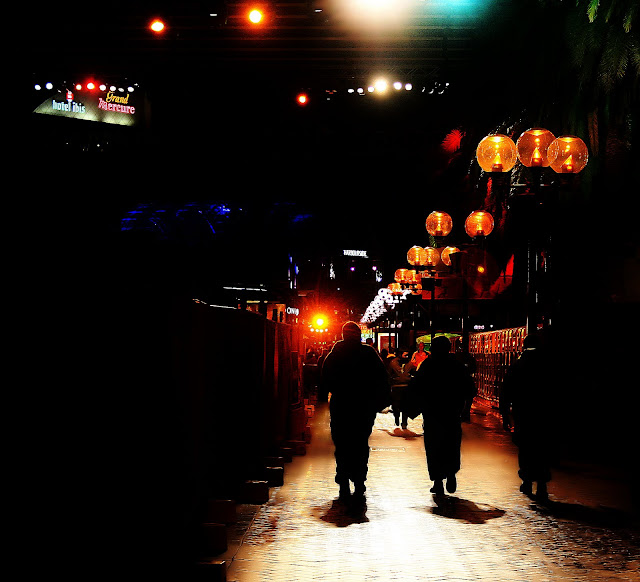 It was world cup night.  Germany already lose to Spain.  Now it's them between The Netherlands. If Spain wins, the global economy will improve.  The Euro will go up.  And us living in First World countries will have more buying power.  This also means we could buy from stuff from China.  (Obviously, I'm being facetious.)
These three monks were on their way to watch the game.  Darling Harbour or whoever was sponsoring, was to air the game in the open.  It wont be aired until about 4am but people were already camping  at the harbor to see the championship game.  Yay, en espanol... ariba Espana!
Darling Harbour is a nice place to hang out, grab a beer and chill out.  Just don't eat at the restaurants unless your ready to pay $30 a meal... I'm cheap so I try to avoid them.  Heh... There is one place, and I forgot what the place is called... it's on the harbor side... a bit closer to the zoo.  I tried to google it but can't find it... maybe I'll remember.  Everything is $10.  Great eats.  Steak sandwich, beef kabob, all kinds.  It's self-served but I don't care.  They also have great beers on tap.  I would recommend the James Squire and Tooheys. Speaking of beers, stay away from the Pure Blond beer, it's ditzy and diluted.  And don't ask for Foster's... the locals will laugh at you.  Cheers, mate.
Read the rest of the Sydney Chronicles.
Read what people are saying about this wondrously captured photo in Flickr dA and RB . Heh-heh.  Okay, it's not that wondrous.  But it I can dream, can't I?
Email ThisBlogThis!Share to TwitterShare to FacebookShare to Pinterest
Labels: 18-55mm kit lens, canon rebel xt, corel paint shop pro x2, night shot, people, shameless self-promotion, sydney, sydney chronicles, urban
Newer Post Older Post Home