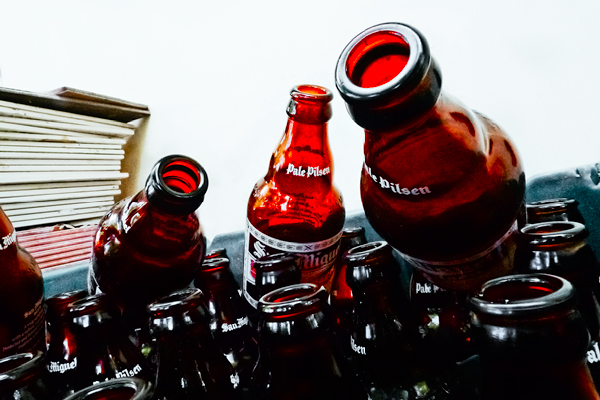 The good folks in Culasi like their beer – especially if someone else is paying for the drink.  For them, beer after all is considered a rich man’s brew, which is reserved for times requiring mandatory celebrations.  On normative nights the choice could be a mixed of local concoction that guarantees even the professional drinker an Excedrin hangover.  Contrast that to special occasions – like when the house rooster lost in a cock fight, or that time the neighbor’s piglet found its way to their backyard – these are sure to provide the impetus for breaking out a case or two of the best San Miguel brew.  Cheers!

Glenn:  All empty. How sad.

Glenn:  When people would say "it's 5:30 somewhere", I'd sometimes think about being at the North or South poles, where all the time zones converge.  Take a step East, and it's midnight; West, and it's noon.  The poles are where there is always a good time to break out a case of brew, which of course explains the jolly man in the red suit.

Juzno:  And Ringo on sideline playing the castanets. The girls just can't contain themselves.  "With a love like that you know it can't be bad... whooo!"

Juzno:  Yea they were brown but after several rounds they turned red from singing.  The jolly old man in the red suit made sure everyone had their share.