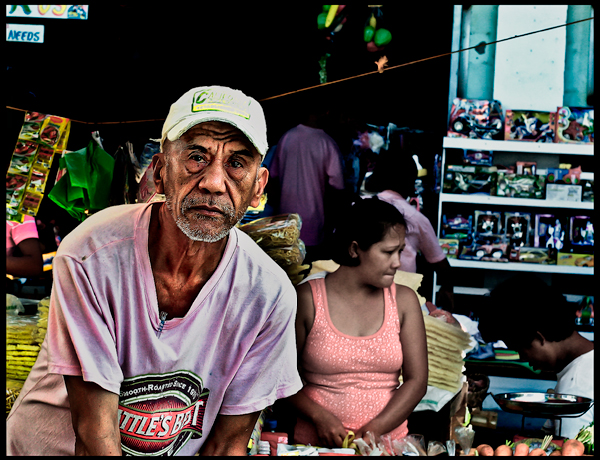 This is my fave day of the work week so I guess I can post one of my fave shots, which doesn't usually translate to what is popular.  For one thing, the colors are weird.  And the horizon is skewed --maybe so the lady at the store can tip the scale.  Heh.  If I have shown this to a photography instructor, I would immediately get an F.

Taken late last year when I traveled back to the Philippines.  It was on a crowded market place.  With my normal lens, I must have been standing about 10 feet in front of the old man when I took his picture.  No flash, just outside light.  I love this shot because the  man appeared to be looking past me.  It's as though at that moment I was invisible to him.  Maybe I was.  My theory is you keep doing street photography and eventually even while wearing a Walrus costume you'll be inconspicuous like the vegetables in this image.  Koo-koo-koo-chew.

I recall the market that day was a trip.  Walking around with a DLSR camera hanging on my neck was sure to get attention at this small rural town.  Every time I pointed the camera to shoot at someone, other people would try to warn my subject, "hey you're going to be on Facebook!"  I love it.

Glenn:  Hey, isn't that Raman, and what's he doing in the Philippines?

Juzno:  Raman was following Lady Gaga on her worldwide tour but all he got was a Seattle's Best T-Shirt.

Glenn:  Okay, that explains his expression.