Eyes in the Name of Love 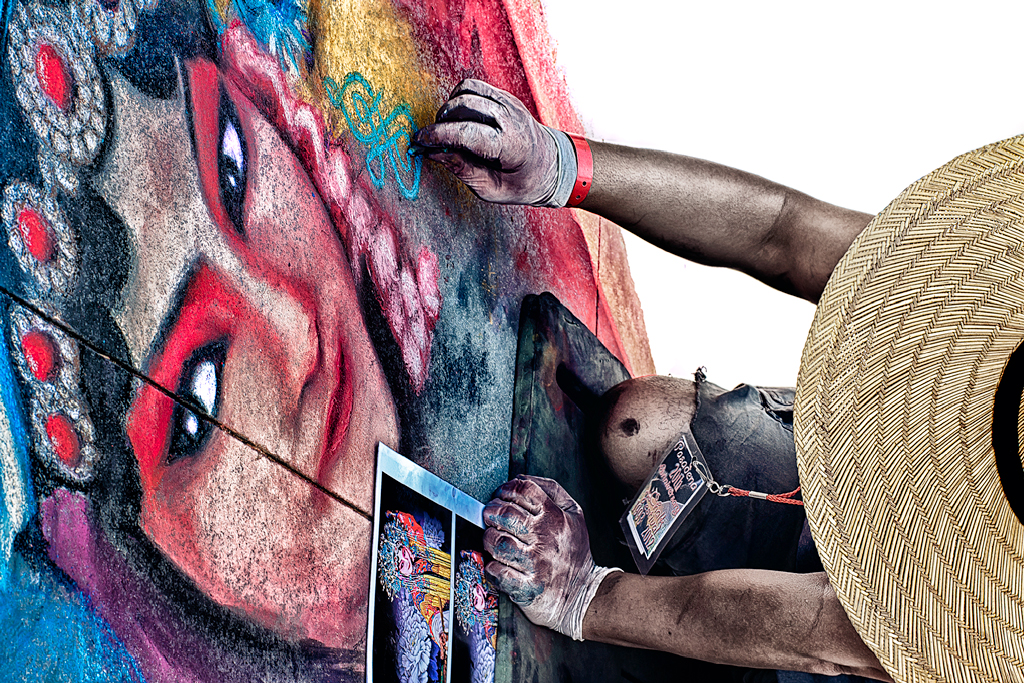 Techie notes:  Taken at the Chalk Walk Festival at Old Pasadena.  The light was harsh that day so it was very difficult to capture decent images.  Sometimes it's hard to decide if I should expose for the shadows or the highlights.  I think I've succeeded in this one by making sure that I avoid including most of dark shadows in the frame.

This is the second of the Street Photography series I'm working on.  I'm hoping to publish the series in book form.  I'll probably call it something like Days Turned Out to be Nothing More Than Street Indulgence.  Maybe you can suggest a better Title for the book.  Cheers.

Good luck on the street photo album.  Luckily you have captured so many street shots that I don't think you'll have a problem compiling it.

Juzno: Yea unlike the one yesterday, in here on one hand I wanted to create a sense of homogeny between the artist and the art by obscuring obvious differences.  Yet on the other hand I also wanted to distinguish the artist and his work so I ended up muting the skin tone of the artist.  It's contradictory of course but I think I have succeeded in creating that tension.  At least I'm happy with the result.  I don't know if you've noticed what's not there (hah... an illogical statement).  I mean I've left the right hand corner white to create spatial absence.  At first I did it for practical reason as there wasn't anything there except blurred dirt and unrecognizable objects.  All not very pleasant to look at.  By whitewashing that area and leaving it blank I wanted to lure the viewer into that white hole.  Maybe to provide some relief for the existing tension.  Or maybe just my own perverted trick for my amusement.  I don't know.

The original shot had the artist on top of the artwork.  By rotating the frame 90 degrees to the right, I found a happy position where the artwork and the artist are side by side -- rendering them co-equal.  Again I was thinking homogeny here.  Even for just a moment.  In the end I want the viewer to imagine that the artwork would evolve to be the artist.  A reversal in position.  But I don't think this photo has achieved that.  It is what it is.

KC:  Good call on the white space there.  The Fauvists employed this technique to provide relief from all the vibrancy in the bulk of their paintings.
Email ThisBlogThis!Share to TwitterShare to FacebookShare to Pinterest
Labels: 50mm Carl Zeiss Planar T, Canon EOS 60d, street, urban
Newer Post Older Post Home