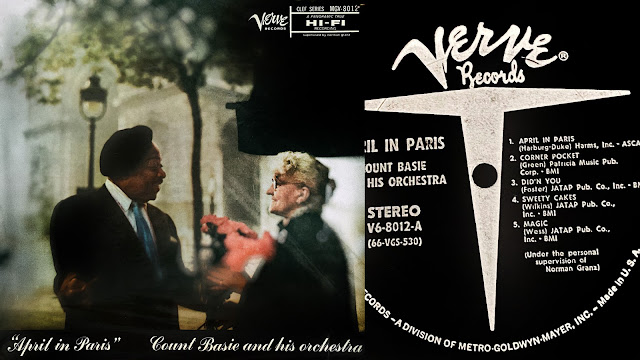 “Go to heaven for the climate and hell for the company.” - Benjamin Franklin Wade Released 1945 under the album title April in Paris. The Count Basie Orchestra was a 16 to 18-piece big band, one of the most prominent jazz performing groups of the swing era, founded by Count Basie in 1935 and recorded regularly from 1936. Despite a brief disbandment at the beginning of the 1950s, the band survived long past the Big Band era itself and the death of Basie in 1984. Alto Saxophone – Earle Warren, Jimmy Powell Baritone Saxophone – Rudy Rutherford Double Bass – Rodney Richardson Drums – Shadow Wilson Guitar – Freddie Green Piano – Count Basie Tenor Saxophone – Buddy Tate, Lucky Thompson Trombone – Dickie Wells, Eli Robinson, Louis Taylor, Ted Donnelly Trumpet – Al Killian, Al Stearns, Harry Edison, Joe Newman I do not own the copyright to the music, the recording and the photos.  (Image post and video art were appropriated from the original album.) This video is posted for educational use under Section 17 U.S. Code § 107. Limitations on exclusive rights: Fair use. As much as possible, I attempted to remove most of the pops and crackles from the original vinyl album. Hope you enjoy.  INXDS. #bebop #jazz #vinylrecord #quoteoftheday :