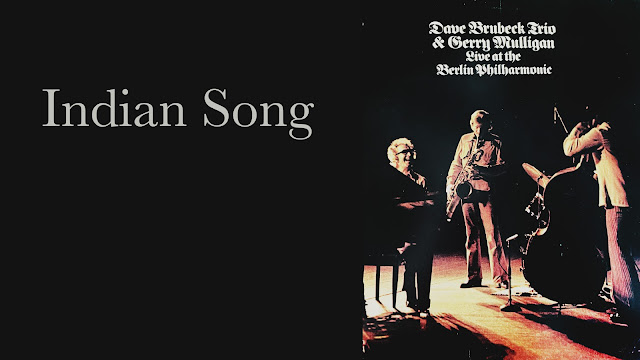 "I suppose I could have stayed home and baked cookies and had teas." - Hillary Clinton From the vinyl album Live at the Berlin Philharmonic. Dave Brubeck - piano; Gerry Mulligan - baritone sax; Jack Six - bass; Alan Dawson - drums "In 1967, Dave Brubeck broke up his famous quartet (alto saxophonist Paul Desmond, bassist Eugene Wright, drummer Joe Morello) and the following year formed his New Quartet with baritone saxophonist Gerry Mulligan, bassist Jack Six, and drummer Alan Dawson. They recorded two albums in 1968 (Compadres and Blues Roots) and the following year appeared at the 1969 Newport Jazz Festival. "This Saturday evening engagement on July 5th found Brubeck, Mulligan and the regal rhythm tandem of bassist Six and drummer Dawson to be truly on one accord in a stellar performance that wowed the Newport faithful at Freebody Park. They open with a soulful loping blues which eventually morphs into the Duke Ellington staple, "Things Ain't What They Used To Be" (a tune that Brubeck had also played with his quartet at the 1958 Newport Jazz Festival, documented on a live Columbia recording). From the outset, Mulligan is in a laidback mood on top of Dawson's loose, interactive swing pulse. Brubeck comps forcefully behind Mulligan's solo before launching into a harmonically provocative solo of his own that introduces some edgier elements into the proceedings (his version of Cecil Taylor by way of Mary Lou Williams) while still remaining true to the spirit of Ellingtonia. Six also turns in a potent bass solo on this spirited opener. "They follow with a mellow rendition of the Johnny Green-Edward Heyman standard "Out of Nowhere," a tune introduced in 1931 by Bing Crosby and subsequently covered by such jazz stars as saxophonist Coleman Hawkins and guitarist Django Reinhardt, alto saxophonists Charlie Parker and Sonny Stitt, vocalists Lena Horne and Joe Williams. Next up is requiem-like "Blessed Are the Poor (The Sermon on the Mount,)" a mournful piece carried by Mulligan's resonant baritone horn. (The following year, Brubeck's new quartet with Mulligan, Six, and Dawson would record this spiritual number with the Cincinnati Symphony Orchestra). Mulligan's performance is especially moving while Brubeck again pushes the envelope on his solo, treading into the Cecil Taylor camp with his spiky chordal clusters and sparkling, dissonant runs on the keyboard. And they close their set with the propulsive 6/8 number, "Indian Song," which highlights Dawson on a brilliant extended drum solo." (Excerpt from Liner Notes - Milkowski) I do not own the copyright to the music, the recording and the photos. (Image post and video art were appropriated from the original album.) This video is posted for educational use under Section 17 U.S. Code § 107. Limitations on exclusive rights: Fair use. As much as possible, I attempted to remove most of the pops and crackles from the original vinyl album. Hope you enjoy. INXDS #bebop #jazz #vinylrecord #qouteoftheday :