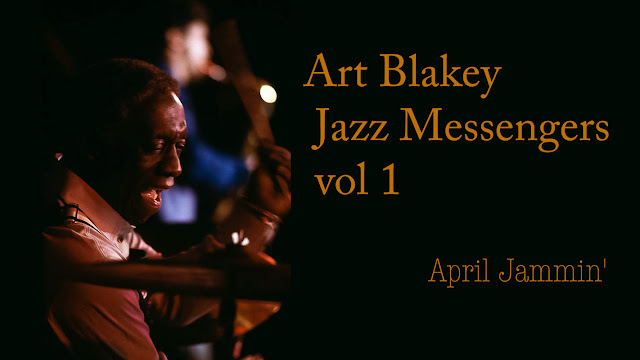 "You don't choose your family. They are God's gift to you, as you are to them." - Desmond Tutu

The Jazz Messengers were a jazz combo that existed for over thirty-five years beginning in the early 1950s as a collective, and ending when long-time leader and founding drummer Art Blakey died in 1990.  Blakey led or co-led the group from the outset.  "Art Blakey" and "Jazz Messengers" became synonymous over the years, though Blakey did lead non-Messenger recording sessions and played as a sideman for other groups throughout his career.

"Yes sir, I'm gonna to stay with the youngsters. When these get too old, I'm gonna get some younger ones. Keeps the mind active." - — Art Blakey, A Night at Birdland, Vol. 2

The group evolved into a proving ground for young jazz talent. While veterans occasionally re-appeared in the group, by and large, each iteration of the Messengers included a lineup of new young players. Having the Messengers on one's resume was a rite of passage in the jazz world, and conveyed immediate bona fides.

Blakey taught himself to play the piano while he was a teenager and performed on piano (and later drums) in jazz clubs in the evenings while working in the steel mills by day. Beginning in 1939, as a drummer, he performed with several bands, most notably (1944–47) with that of Billy Eckstine. Among the artists he met and performed with during that period were Dizzy Gillespie, Sarah Vaughan, Charlie Parker, Dexter Gordon, and Billie Holiday.  [https://www.britannica.com/biography/Art-Blakey]

I do not own the copyright to the music, the recording and the photos.  (Image post and video art were appropriated from file donated to Wikimedia Commons by Riksantikvarieämbetet as part of a cooperation project. The donation was facilitated by Europeana.  Riksantikvarieämbetet; http://kmb.raa.se/cocoon/bild/show-image.html?id=16001000424176; @/record/91622/raa_kmb_16001000424176.  Art Blakey, trummor och ledare för The Jazz Messengers, på Umeå jazzfestival.; Musik; Personer; Övrigt; http://www.eionet.europa.eu/gemet/concept/5449.) This video is posted for educational use under Section 17 U.S. Code § 107. Limitations on exclusive rights: Fair use.