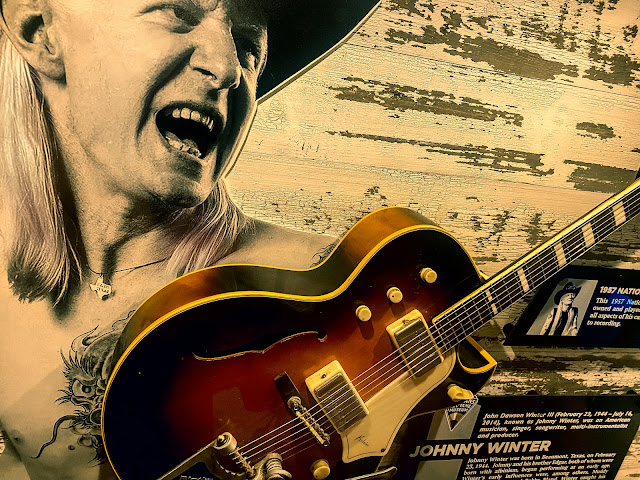 If you are into Texas Blues and have never heard Johnny Winter performed, then you ain't heard nothing yet.

The first Winter LP I discovered was "Live Johnny Winter And".  I was just learning to play the acoustic guitar and then I heard his tone and style of playing.  It made me take blues guitar playing seriously.  Ever since, all I wanted was to play an electric guitar like Johnny Winter.

In 1988, Winter became the first white musician named to the Blues Foundation Hall of Fame.

Winter is widely recognized as being one of the greatest slide guitar players of all-time. And while many guitarists utilize odd items to run up and down their fretboards – Duane Allman of the Allman Brothers Band famously used old Coricidin glass pill bottles – Winter’s choice was similarly unique. “I used to play slide before this, but could never find a good slide,” he told Tom Guerra. “I'd use everything from a wristwatch crystal to broken-off test tubes to lipstick cases, bottles ... I tried everything, but nothing would work, until I found this conduit pipe, and I've used the same piece of pipe for 30 years for both acoustic and electric slide. Its just a piece of plumber's pipe that just fits my finger real good.”

Image taken at the Musicians Hall of Fame in Nashville, Tennessee.  The guitar is real.  So is the textured wall.  The man in the photo is a cardboard cut out.  Sometimes the best photo is the one already taken.