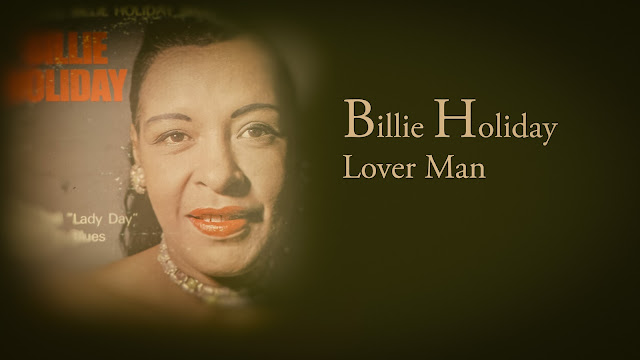 From the vinyl LP The Billie Holiday Story.

I don't know why but I'm feeling so sad

I long to try something I never had

Never had no kissing

Oh, what I've been missing

The night is cold and I'm so alone

I'd give my soul just to call you my own

Got a moon above me

But no one to love me

That the thrill of romance

I go to bed with a prayer

That you'll make love to me

Strange as it seems

And you'll dry all my tears

Little things in my ear

Hugging and a kissing

Oh, what we've been missing

That the thrill of romance

I go to bed with a prayer

That you'll make love to me

Strange as it seems

And you'll dry all my tears

Little things in my ear

Hugging and a kissing

Oh, what we've been missing

“Lover Man (Oh, Where Can You Be?)” (often called simply “Lover Man”) was written by Jimmy Davis, James Sherman and her old pal Roger (“Ram”) Ramirez from their teenage years appearing at The Apollo Theater in Harlem together.

In her 1956 autobiography, Lady Sings the Blues, Billie Holiday recounts that “Jimmy [Davis] was in the Army when he wrote ’Lover Man’ and brought it straight to me.” Unfortunately, before she could record the song, Davis was shipped back to Europe and Holiday never saw him again. While the singer does not mention Jimmy Sherman she does lament “Ram Ramirez gets all of the credit for ‘Lover Man,’ but that’s only part of the story.”

The song is particularly associated with Billie Holiday, for whom it was written, and her 1944 version reached #5 on the R&B chart and #16 on pop in 1945, and was inducted into the Grammy Hall of Fame in 1989.

Eleanora Fagan (April 7, 1915 – July 17, 1959), known professionally as Billie Holiday, was an American jazz and swing music singer. Nicknamed "Lady Day" by her friend and music partner Lester Young, Holiday had an innovative influence on jazz music and pop singing. Her vocal style, strongly inspired by jazz instrumentalists, pioneered a new way of manipulating phrasing and tempo. She was known for her vocal delivery and improvisational skills.

After a turbulent childhood, Holiday began singing in nightclubs in Harlem, where she was heard by producer John Hammond, who liked her voice. She signed a recording contract with Brunswick in 1935. Throughout the 1930s and 1940s, Holiday had mainstream success on labels such as Columbia and Decca. By the late 1940s, however, she was beset with legal troubles and drug abuse.  Because of personal struggles and an altered voice, her final recordings were met with mixed reaction but were mild commercial successes. Her final album, Lady in Satin, was released in 1958. Holiday died of cirrhosis on July 17, 1959, at age 44.

• Billie Holiday once worked in a brothel.

• Billie Holiday auditioned to be a dancer and ended up a singer.

• U2's "Angel of Harlem" is a tribute to Billie Holiday.

• Billie Holiday is responsible for the song of the century.

I do not own the copyright to the music, the recording and the photos.  (Image art was appropriated from the original album.) This video is posted for educational use under Section 17 U.S. Code § 107. Limitations on exclusive rights: Fair use.