The Message is the Medium 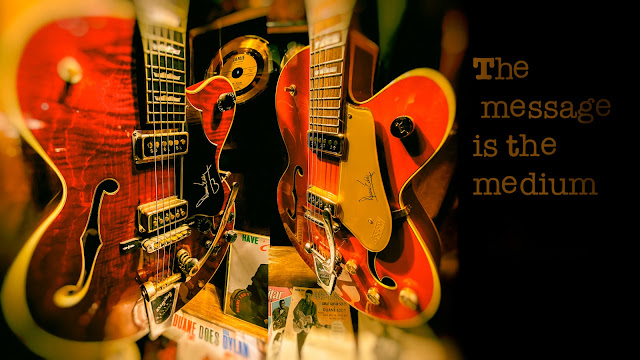 Image captured at the Musicians Hall of Fame in Nashville, Tennessee.  These are Duane Eddy's guitars.  They're not the same, but kinda look the same.  Both have the Bigsby bar, which is used to get the tremolo sound.  (The correct term I'm told is vibrato but then the name stuck.)

I hated the Bigsby because the guitar almost never remains in tune.  Once you yank the bar, the strings don't return to their original positions.  I have a tremolo bar on my Strat, which I never used.  I have another one on my Jaguar, which I had my guitar tech modify the mechanism so the tremolo is blocked and impossible to even move without breaking the guitar.  This is what Eric Clapton did to his Strats.  Children, don't buy  the Fender Clapton Strat model.  It costs twice as much as the regular Strat.  Just insert a block of wood where the tremolo springs are located.  Viola, your bargain priced guitar just doubled its value.

I digress.  What's so important about Duane Eddy's guitars?  Well, his guitar sound is famous for its twangy tone.  His big hits are "Rebel Rouser", "Ramrod" and "Canonball".  Back then he was using a Gretsch Chet Atkins, which I believe are these two guitar.  Always wanted the Orange Gretsch.  I just think it looks cool.  I helped a buddy of mine score a brand new Gretsch replica, and it sounded so great.  Just don't touch the Bigsby bar.