F22 and forget about focusing 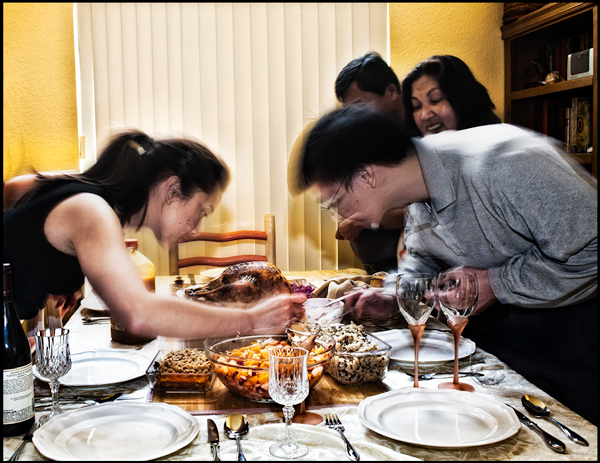 Taken during Thanksgiving.  These two young adults were fighting on who gets the wishbone.  Heh.  I love the story here even though I just made that up.  I also like the selective motion blurs as I think it makes the image more dynamic.  The trick is to get the rest of the elements in the image sharp and detailed.  Maybe you know how this was shot.  Anyway, here's how I did it:

I shot this at smallest aperture on my 35mm lens - which would be f22.  I think the shutter speed was at 1/15.  The slow shutter speed gives this image that ghostlike motion blurs.  And yet everything else is tack sharp.  That is because the camera was on a tripod and I had the flash on.  Since the aperture was very narrow, it didn't matter where I focused the camera given the depth of field I was shooting into.  In this case I set the focus on the turkey but even then as you can see everything from the foreground to the background is pretty sharp.

Try this next time -- maybe on your New Year's eve party.  But wait until everybody had a lot to drink.  That way you can be sure to get those motion blurs.