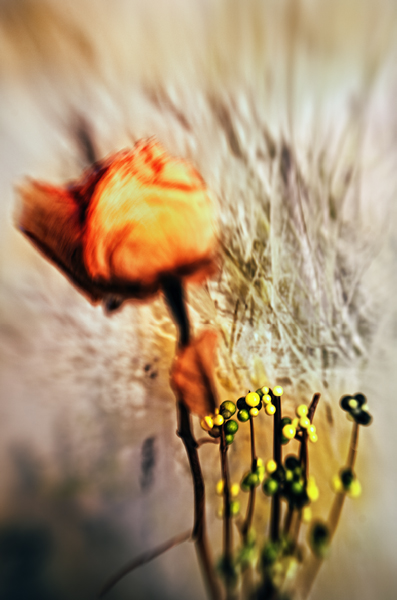 Today is my sister's birthday.  I printed this image the other day and sent it as a birthday card to her.  When she gets it, she'll probably complain that the image is blurry.  She'll probably lecture me on how expensive my cameras are and how I couldn't shoot a decent picture with them.  She's one of those people who doesn't understand my art.  I'll tell her that I sent it to her because she might forget her birthday.  I'll also tease her that she needs new glasses because she couldn't see the image well.  I think I'm one of the few people who make fun of my family publicly.  But I love my sister.

This image is a rework of an old one I shot when I started dabbling seriously into photography back in 2008.  You may have seen the original though I don't think you would remember.  It was one of the photos I posted down stair at the lobby a few years back.  This reworked version has more definition in colors and tone.  It's still blurry.  It was intended that way. I shot it with the Lensbaby, which allowed me to selective focus on the subject.  Conventional wisdom would dictate that the focused area should be the rose.  But I am non-conventional so I chose the holly instead.  If I were to shoot this again I would do the same.  Don't know why but it seems to look better that way -- at least to me.  I know some people would not like the blurry effect but I like it because it imitates the impressionist style.  It also reminds me of how I see things when I get out of bed in the morning, which is basically blurry.