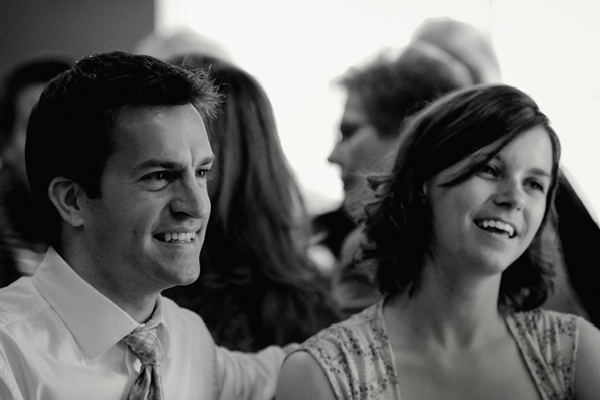 I really like shooting candid images of people.  Hence I couldn't resist this.  They are really such cute couple: Pastor Quentin and Amanda. Hence the title "Q and A".  Taken at our recent church pot luck using the Canon 60d and the 135mmL at manual focus.  I think the composition works.  They are both smiling and unguarded.  Also, the general form is pleasing to the eye.  And the black and white treatment tends to give it a sense of timelessness.  But I would have wished Amanda's shot was more sharp.  Since I was shooting indoor without flash, I was forced to shoot wide open (my iso was already at 800)... I think f2.8 or wider.  At f8 Amanda's image would have been sharper as I manually focused on Quentin.  Perhaps I could have bracketed the focus and took the middle road, which would have been the average.  Q would be less sharp and A would be a bit sharp. Also I think the bokeh should have been more blur.  But this would exacerbate the shot.  My thoughts.  My afterthoughts. I'm hard on myself.  But overall, I still like the image.  I really like shooting candid images of people.  Did I just say that?  I have a strange mind.
Email ThisBlogThis!Share to TwitterShare to FacebookShare to Pinterest
Labels: 135mm lens EF L, black and white, Canon EOS 60d, people, portrait, suburb
Newer Post Older Post Home