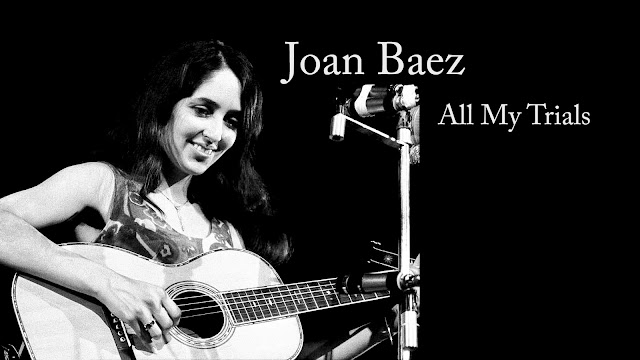 You know your mama was born to die

River of Jordan is muddy and cold

Well, it chills the body, but not the soul

I've got a little book with pages three

And every page spells, "Liberty"

Too late, my brothers

Too late, but never mind

If living were a thing that money could buy

You know the rich would live and the poor would die

There grows a tree in Paradise

And the pilgrims call it the Tree of Life

Too late, my brothers

Too late, but never mind

All My Trials lyrics © Chandos Music

From the the Joan Baez Ballad Book, a 1972 compilation of traditional folk material, culled from Joan Baez' first five Vanguard albums. Though Ballad Book has since been supplanted by the reissue of most of Baez' original Vanguard catalog, for a number of years, it remained the only source to obtain a number of these cuts, as most of her early Vanguard albums temporarily went out of print in the early 1980s.

Joan Chandos Baez  (born January 9, 1941) is an American singer, songwriter, musician, and activist.  Her contemporary folk music often includes songs of protest and social justice.   Baez has performed publicly for over 60 years, releasing over 30 albums. Fluent in Spanish and English, she has also recorded songs in at least six other languages.

Baez is generally regarded as a folk singer, but her music has diversified since the counterculture era of the 1960s and encompasses genres such as folk rock, pop, country, and gospel music. She began her recording career in 1960 and achieved immediate success.

I do not own the copyright to the music, the recording and the photos.  (Images on this video were appropriated from Alamy.) This video is posted for educational use under Section 17 U.S. Code § 107. Limitations on exclusive rights: Fair use.